Sicily, the Court of Accounts launches an investigation into the almost 4 million euros of the Region for an exhibition at the Cannes Film Festival 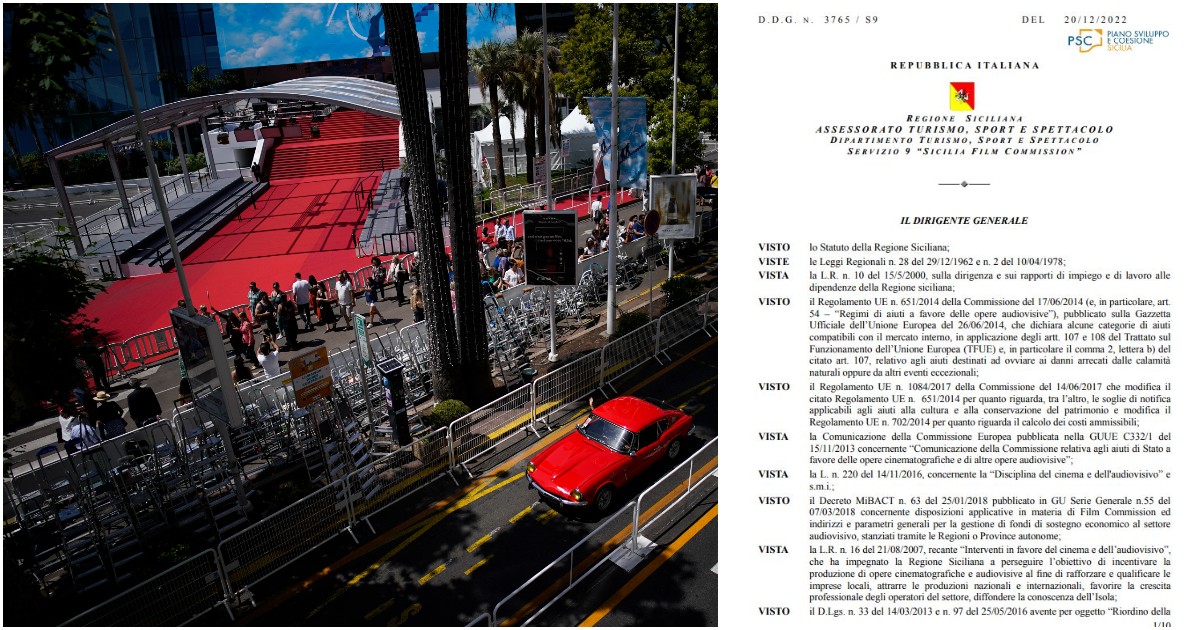 The accounting judges, led by Pino Zingale, opened the file precisely in order to clarify the stages of this story. Funding that has created more than one crack, even within the center-right majority itself

After controversy and internal clashes between Renato Schifani and his travel advisor Francis Scarpinato (From Brothers of Italy) also prosecutor’s office Accounts Chamber Sicilian region draws attention to the quasi 4 million euros financing (without prior notice) of an exhibition in Cannes Film Festival. Accounts Chambers headed by Zingale pine, opened the file specifically to clarify passages of the story. “We immediately took care to ask the competent council for an accurate report on funding in order to proceed with in-depth technical and political assessment. In anticipation of this execution, we have full confidence in the inspection body of the Accounts Chamber, to which from now on we provide all-round cooperation.” Comment by President of the Sicilian Region Renato Schifani.

There Sicilian regionat startuppreliminary exercise budget actually committed 3 million 750 thousand euros for a project assigned to a Luxembourg company Absolute bluethe same one who led the event last year (with a cost of 2.2 million, which was decided by the former adviser, and now deputy. Manlius Messina also from Fratelli d’Italia). The company is managed by a CEO Patrick Nason who is also a photographer by name Awamu Moja: he is entrusted with a photo shoot in Sicily worth 311 thousand euros. Scarpinato flew to Cannes in early December with an official mission: the cost is 2157 euros.

L’opposition in Ars, front row Pd, requested a report and the reason for these expenses, which, however, did not concern only the Cannes event. Loans that have created more than one crack within the same centre-right majoritywhere the bad mood winds. Group leader Come on Italy in Ars, Michael Mancuso, emphasizes that “millions for Cannes are embarrassing, conflicting with what are the real emergencies in the region.” Secretary league in Sicily Nino Minardo, he argues: “I think that in Sicily, the centre-right should pay more attention to their image. From the very beginning of the legislature, only personal grievances, unjustified expenses and appointments were talked about, while problems remain in the background, but are very present in the life of the Sicilians. “For me, as for the majority,” he adds, “we have a great responsibility for what and how we communicate, and at the moment we are not achieving enough, because we seem far from the problems of the Sicilians.”

The case arises after the publication by the Region Decree No. 3765dated December 20, which allocates 3 million 750 thousand euros for financing “Sicily, women and cinema”photo exhibition that will present the island on 76th Cannes Film Festival. This is proof of this, given that already last year the event was financed by the Sicilian treasury, not without controversy. But the criticism, in addition to the millionaire’s spending, also extends to lesser spending, which many of the opposition to the Sicilian Regional Assembly define as useless. the television with motorized 48” OLED screen for 6 954 euros bought from a company based in Rome, business cards and paper material 2305.19 EURO, clothing for staff almost 50 thousand euros. Another 2,305.19 euros was spent (in a firm in Palermo) on 1,800 business cards of various types and inscriptions, 900 business card envelopes, 150 cards with a logo and printing, and 3,000 sheets of various types of notes and 4,270 euros it cost executive chair city ​​center model. Instead buying one was skipped presidential chair, two Oxford model armchairs for guests and a sofa and two other Arcadia model armchairs: the cost of 22 thousand euros, plus VAT, for the president’s office: Schifani, who said he did not know about the purchase, blocked expenses considering it “generally appropriate”. In addition, there is 661,000 euros allocated for the refurbishment and furnishing of an apartment owned by the Sicilian Highways Consortium in Via Crociferi in Rome, which will become new representation region. Now the Accounts Chamber will try to shed light on at least the exhibition in Cannes.

Share
Facebook
Twitter
Pinterest
WhatsApp
Previous article
It’s not a watch, it doesn’t have a display, and they want to discourage you from using wearables in the first place.
Next article
Corgenarj for the first time against Jagr and immediately from scratch: Maybe I will finish even before him