Meloni: “During the election campaign, I did not promise to reduce excise taxes.” But there is in the FDI program. And the prime minister explains it like this 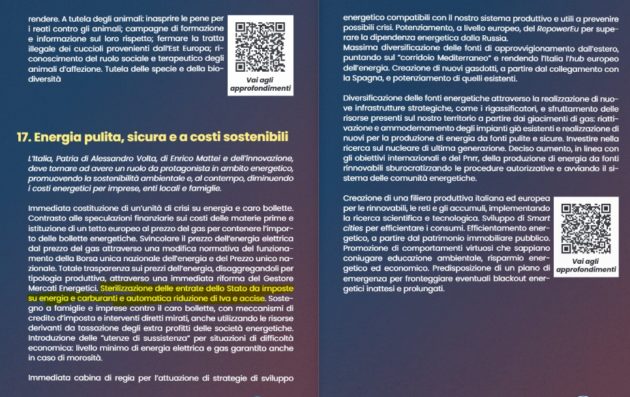 The prime minister explains: “Did I want to reduce state duties on fuel in 2019? But then the world changed, and, in fact, before the elections on September 25, I never spoke about it.” But he wrote it in the government program of his party. M5s: “He hopes for some kind of collective amnesia”

“I didn’t promise this election campaign what would i cut excises on gasoline trivial because I knew what kind of situation I would be in.” That’s how the prime minister Georgia Meloni he defends himself with social media videos. The prime minister is thus responding to the controversy raised both by opposition parties and on social media over a now-famous video in which, in 2019, the prime minister (as a “simple” leader of the Brothers of Italy) criticized excise taxes. fees. The problem is that Meloni may never have used this argument in the last campaign that led to the Sept. 25 election, but the excise cut was on his party’s campaign agenda.

In today’s video, in the familiar now”Georgie’s diary”, articulates the Prime Minister: “A video from 2019 is circulating from many sides, in which I, filling the car with gasoline, spoke about the need to reduce excise taxes on gasoline and, naturally, since the government did not decide to change the rule of the previous government, which he predicted that excise tax cuts will end at the end of this year, he said to himself: “Meloni is inconsistent” because in the campaign she promises you one thing and then does another to the government. Now, since I’m a pretty serious person, it’s no coincidence that this video is from 2019 and not from this last campaign selective”. The problem, however, is that paragraph 17 from FDI program (available online) we read that among the goals of the party there are also “sterilization from government revenue from taxes on energy and fuel and automatic reduction VAT And excise“.

Inevitably, the objection of the leader of the M5s group in the Chamber is directed to this. Francesco Silvestri”It’s unbelievable,” he says, “that Georgia Meloni say that you never promised to reduce excises during the election campaign”, recalling exactly this place in the party program. “Now he’s taking it all back, crossing his fingers and hoping for some sort of collective amnesia,” Silvestri concludes. “This executive continues to disown himself,” continues the leader of the 5 Star group, “and is now the victim of a transformation that takes on ridiculous forms and content. After turning to monthon drill and on many other things, now comes the gasoline that they have deceived millions of voters. The government is now in chaos, the only memory that remains is the grace of white collars, tax evaders and corrupt officials.

In the following Facebook comment a few hours later, the Prime Minister responded to the opposition, thus explaining this passage of the program: “This means that if you have more income from higher fuel prices, you use them to lower taxes. But, of course, we didn’t have much more money. So this is a very different commitment than “we will reduce excise taxes.” A goal that we continue to share and work towards, but a commitment that, in the current context we couldn’t take it“.