Dara Rawlins and Pavel Nedved: They bought a piece of land for 24 million! 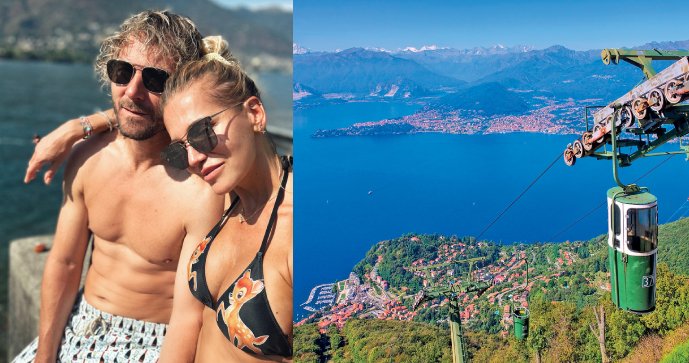 Dara Rawlins (49) and Pavel Nedved (50) are planning not only a joint future, but also a joint love nest. They bought a piece of land in a place they both loved. It has great views of Lago Maggiore in Italy and costs a fortune.

Even if thousands of kilometers separate them at work, they do not miss a single opportunity to spend time together. After a year of relationship, they made the singer Daru Rollins and her partner, Juventus vice president of football Pavel Nedved., according to the Italian media, the relationship is a serious step and they are planning a joint nest. They want to build it from scratch in one of the most beautiful places they have visited together.

“This year, Pavel Nedved and his partner, singer Dara Rolins, bought a plot of land for a million euros (about 24 million crowns) in Tronzano overlooking Lake Maggiore,” This is reported by the Italian site Prealpi. The land plot is located in Arola, i.e. right on the shore of the desired lake. According to the Italian site Varesenews, this is almost 2,000 square meters.

To a company with a dog me

“The cadastral maps indicate that it has pastures and arable land. But it is clear that the vice-president of Juventus (who earned 436,000 euros last year) and a very famous Slovak artist in her homeland will not suit her garden. The plot for 440 euros per square meter can be built up. writes the Italian newspaper Corriere della Sera. And he adds that Dara and Pavel founded a company in Turin called Foxy Group, and simply gave the land to her. It’s no coincidence that Dari’s dog was called Foxy…

He will build two houses

“We agreed that we will no longer have children together, but we will build two houses. One here in the Czech Republic and the other in Italy. We don’t want to force each other to move.” Dara has been revealed in the past to iDnes.

“Our most famous VIP is and always will be Gigi Riva. Giovanni Parmigiani, mayor of the local municipality of Leggino, near Arola, told Corriere della Sera. He mentions a local tive, a legendary football striker who used to run around the local grasslands as a child. But he is not the only familiar neighbor that Nedved and Rawlins have acquired. The sister of former Prime Minister Berlusconi also owns a house here. and the head of the oil giant ENI, Eugenio Sefis, also had a villa right in Arolo, which the Kennedy family later bought. Other Italian celebrities live or visit here, including the most famous Italian influencer couple.

Home for the summer?

This seems like the most likely option. Turin, where Pavel Nedved works, is 160-170 km away by car, which is a two-hour drive. Therefore, the question arises whether high-ranking officials of the football club would like to constantly travel to work. And this is what gives rise to the option that the couple will build a country house. But there is another option – to invest in an attractive and sought-after place and sell the house for sale or rent. After all, their company Foxy Group is also engaged in construction and property magement.

Share
Facebook
Twitter
Pinterest
WhatsApp
Previous article
According to science, this is the 30-second brow massage you need after a long day at the computer.
Next article
A Tesla Model 3 ends up in a blizzard on summer tires – horrible experience