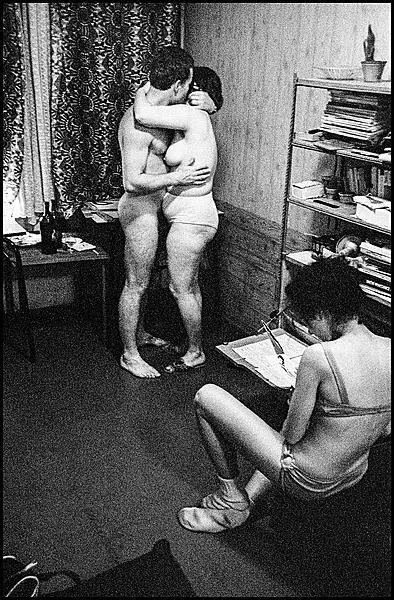 Normalization is different! For example, through the images of one of our best documentary photographers Yaroslav Kuchera (76). It is his photographs from 1968 to 1989 that are currently on display at the exhibition “The Calm Before the Storm” at the Leica Gallery in Prague. Those times were not good, but humor and irony are felt in his photographs, and sometimes their stories chill the soul.

Alfa Passage, Mělníká Winery, Blatnička, Prague subways or the outskirts of Czech cities. They are all of them places that Kuchera liked and are well documented. And he always maged to find something that remains exceptiol to this day. Prostitutes, characters of Prague buffets or just women who ran out of cafes to smoke.

“It was necessary to go somewhere to eat, and the university canteen was not as interesting as, for example, Prague buffets.. So I took out my camera and started taking pictures of what interested me. And so it became more and more. Well, I just wanted to capture that time,” he told the Aga! newspaper. Curl. He had a good grip on her and maybe Thanks to him, she doesn’t look as bad as she used to. He just maged to find something better or more pleasant in her….

Yaroslav Kuchera graduated from the Faculty of Civil Engineering of the CTU. I started taking photographs while still a student. AS WELL AS His photos were not liked at the time. He was arrested, beaten and held in custody for several weeks. And then, as he says, he realized that the totalitarian regime should be documented in a slightly different way. That’s how it started showing up a series of photographs of streets, arcades, buffets and pubs.

The story of an attractive blonde

In a well-known photo for the newspaper, Jaroslav Kucera authentically recalled: “Once we were drinking wine in the basement of the Blatnicka winery on Michalska Street in Prague, and she was sitting not far from us. very attractive blonde. Of course, I had a Leica with me (1938 camera). She suddenly got up and went down the stairs to the street, where she lit a cigarette, the so-called slime, while I photographed her. After that, we talked and she told me what she sells at the Small Market in a fishing shop. And I wrote a small gloss about this photo, they say, it does not suit me. And that’s how I exhibited and published photos over the next few years.

Nineteen years later, in 2002, I had an exhibition at the Prague City Hall, and the entry appeared in the visitor’s book. “Mr Kuchera, In fact, I sold fishing equipment in the Male market, I work there to this day and became a store mager..” And she didn’t sign. Therefore, I corrected the description for other exhibitions. And it was also repaired at an exhibition in Prague Castle in 2013, despite the fact that the lady is probably a little angry with me. And on the last day of the exhibition, Mrs. Marcela Novot called me and said that she was the same girl from the photo and that she was no longer angry.

I eventually talked her into coming at the last minute and took a picture of her in front of a small billboard. Of course she was still smoking slime. And the story was completed another nine years later on Thursday at the opening of the Leica gallery, when I was filly able to give her this billboard and the photo of her standing in front of it in 2013.”

His heart was bursting with emotion

“This photo has very sad story. The man on the left was our beloved and noble leader Wanicek, who once confessed to us that he could filly visit his immigrant son in distant Australia. But we did not suspect that after some time he would be brought to us in a zinc coffin. The emotions of the meeting made his heart break. I don’t even need to imagine the actor of the Natiol Theater Vladimir Brabts standing next to me,” recalls Kuchera.

Exhibition “The Calm Before the Storm”