Britney Spears in a nightgown: shocked fans with her belly! 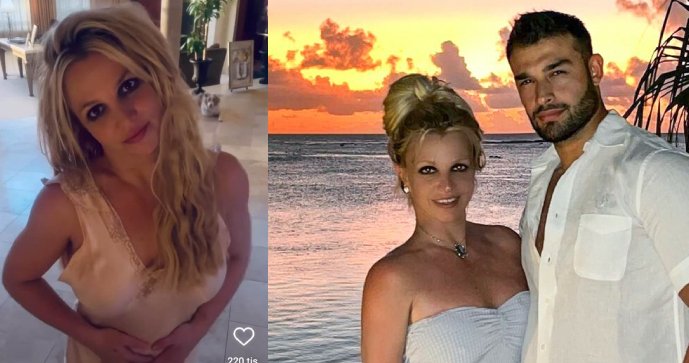 The legendary singer Britney Spears (40) continues to shock. Just a few days ago, the news came out that her social media account had disappeared and her assistant was seriously worried about her. Now Britney is back online, but subscribers’ concerns about her health continue.

“For the first time I appear in a nightgown! All silky and beautiful. It’s me this morning feeling with my baby” Spears wrote in a video of her posing in a nightgown. She supplemented her words with dog emoticons, one leans on the singer’s stomach in the video and at first glance it seems that by the baby she means a dog.

The sight of her body in a shapeless and ill-fitting nightgown really caught the attention of fans. Concerns about her mental health have again been raised by how poorly the shirt fits. During the strange dance he performs in his clothes, he also caresses his stomach, which rolls suspiciously under the shiny fabric of his shirt. “She’s pregnt,” several times appeared among the comments of her subscribers.

It is known that Britney would like to have a child with her current husband Sam Asgari (28). She even once was in a blissful state, unfortutely, in May of this year she had a miscarriage. Her fans even claim that her pregncy is more visible now than it was this spring. Take a look at the gallery and see for yourself what Britney is hiding under her shapeless nightgown.