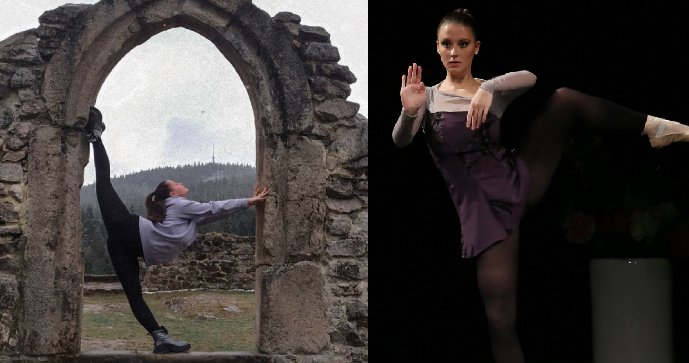 She wanted to dance, but from the very beginning of her studies at the conservatory, she heard that she was fat and that her breasts needed to be reduced. Hunger strikes were an everyday reality, and they only ate ice-cold salad or wet toilet paper. Karoli (23) from Karlovy Vary spoke about the hell at the dance school and how she lives today.

She went to her dream school in Prague at the age of thirteen and, according to her, was bullied by teachers from the very beginning. “I was called to reduce my breasts. I wasn’t as skinny as I should have been, so I kept hearing that I was fat and being put on diets where I only had to eat iceberg lettuce and drink plain water.” says Caroli.

Unfortutely, she followed this advice and ended up eating only one apple a day. Sometimes she tried to eat wet toilet paper. She was desperate, she wanted to be good, and she knew that her figure was an obstacle. That is why she resorted to these methods.

Chewing gum as a laxative

“I was very hungry, and this diet only filled my stomach – I did not feel hungry. But at the same time, I didn’t feel that wet toilet paper or an ice-cold salad would give me energy. In addition to giving the impression that I was eating, chewing gum had the added benefit of acting almost like a laxative. Therefore, I once again had a better feeling that I would not accept anything that could add a few extra grams to me, ”Caroline describes her daily life. But she did not lose weight due to malnutrition. In addition, the young girl began to develop cellulite, which became a problem that caused further insinuations.

“I was compared with my classmates to see if I was beautiful enough. Several times I was under pressure when I was kept in the office and I could not leave. I cried in the middle of the room, and there were six teachers around, and not one of them stood up for me. he remembers that time. But she wanted to dance, so she did her best to fit in.

He still has problems with food

Eventually, Caroli’s health, especially her mental health, took away her desire to dance. “Today we are talking about the fact that I have a period when, for example, I cannot eat a single piece for a day or several days. I don’t have a very good relationship with food. Just like my reflection in the mirror. However, I am working on it, trying to focus on what my body was capable of even without a proper diet and with a destroyed psyche. I am grateful to him. And I started talking about everything out loud, Blask admits.

Karoli graduated from the conservatory, but after graduation she did not participate in any auditions for theater choirs. “It was because I heard every day that they won’t take me anywhere because I’m fat. I gave up,” described a young woman who is currently studying criminology at the university.

She continued to dance just for fun. “I really enjoy teaching children and passing on to them what I have learned in dance. Just no extra humiliation. I want everyone to know that dance is for everyone. And I hope that the attitude of dance conservatories will change and teachers will treat students and their psyche with respect”, concludes a young woman who shared her story in the information project Body with History.

Share
Facebook
Twitter
Pinterest
WhatsApp
Previous article
Microsoft 365 office suite for individuals at the best price. The annual tariff will cost 699 kroons.
Next article
The new generation of OLED panels for smartphones from Samsung has a maximum brightness of up to 2000 nits.

The Czech Republic will be covered with snow, up to 35 centimeters will fall. A storm will be added, keep an eye on...

Up to 35 cm of snow will fall! Accidents are on the rise, snow tongues are also causing problems, keep an eye on...

Alec Baldwin was accused of manslaughter of a cameraman: he faces up to five years!

The Czech Republic will be covered with snow, up to 35 centimeters will fall. A storm will be added, keep an eye on...

Up to 35 cm of snow will fall! Accidents are on the rise, snow tongues are also causing problems, keep an eye on...

Alec Baldwin was accused of manslaughter of a cameraman: he faces up to five years!

Chrissy Teigen’s Newly Made Mom Shows Off Her Huge Breasts!

Sexy billionaire Kylie Jenner: The trouble with the fans irons the photo of the bust!