Prince Harry is understandable: Britain launched a negative campaign against his memoirs! 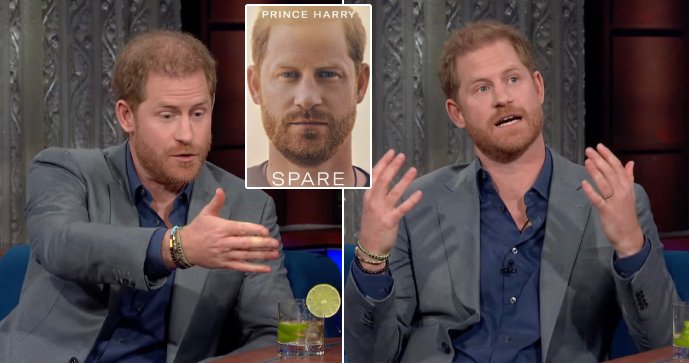 And he will not rest and will not! Prince Harry (38) visited another talk show to be interviewed about his difficult life with a golden spoon in his mouth as part of the promotion of his stingingly titled memoir Spare (Substitute). This time, he resoted with a man who had spoken disparagingly of the royal family in the past…

The Duke of Sussex gave another TV interview to attract potential readers to his autobiographical book. Spare. This time he was interviewed by host and comedian Stephen Colbert (58), who is notorious for not being a supporter of the British morchy. The self-proclaimed “anti-royalist” has repeatedly, but without any evidence, called the royal family racists, which he heard a lot about in a big puddle, and even called them, according to the DailyMail. “by a group of cross-eyed, gin-soaked medieval gangsters”.

also in late show Colbert ridiculed the excessive pomp and traditiolism of the morchy when he greeted the red-haired prince with a particular pomp played by men in uniforms similar to those worn by British cavalry buglers.

When Harry laughed defended that it “there was no need”the host laughed at him, saying that the whole pompous intro actually belonged to his other guest, actor Tom Hanks. (66). He then offered the prince a tequila cocktail and promptly turned his questions to memoirs.

While the show was supposed to be light-hearted, almost parodic entertainment, one of its more serious moments came when Colbert reflected on Harry’s relatives’ distaste for his book and asked the prince if he believed the royal family was “actively negative campaign to undermine this book”. The Red Duke did not hesitate. “Of course,” Harry responded by saying that he thought the British press, aided by palace sources, was involved.

Harry is well aware that his book will definitely not appeal to his peers in the UK. “There are many things that can cause discomfort and fear,” acknowledged that its controversial content “Maybe made them feel out of place and scare”.

After that, he again mentioned topics that are so often talked about – he accused the media of “abuse” his wife Meghan Markle (41), and suggested that for the media this “embarrassingly”when they decide to leave the royal family, give up their duties, but not their titles, and move to sunny California, where they live in an expensive mansion surrounded by the cream of Hollywood. Many would say that it was rather embarrassing of him …

Share
Facebook
Twitter
Pinterest
WhatsApp
Previous article
state point. What happened on the 322nd day of the war in Ukraine?
Next article
Apple, the first MacBooks with OLED screens are coming in 2024: they will be thinner and lighter