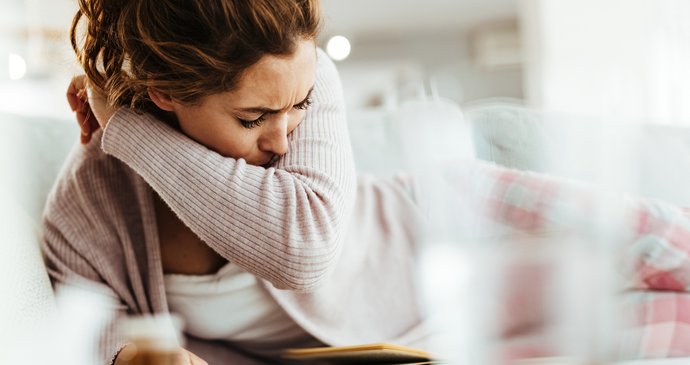 This is the sound we are used to hearing all around us, especially during the colder months. We usually have a cough associated with a cold, and we know that in this case we can get rid of it pretty quickly with a little effort. In addition, it may have other causes that should not be underestimated, especially if the cough persists.

“The purpose of coughing is to clear the upper respiratory tract of mucus or foreign irritants. It is perfectly normal to clear your throat from time to time, but if the cough lasts a long time, gets worse, or changes in character, it may indicate various serious health problems. Chronic cough is definitely not normal and it is always good to try to find out what is causing it. Deadly diseases can be hidden behind a seemingly “innocent” cough.” explains MUDr. Libor Havel from the Pulmonology Clinic of the Thomayer University Hospital in Prague.

How long does the cough last?

We are all familiar with acute coughs – each of us has suffered a cold, flu or other seasol illness that leads to inflammation of the respiratory tract. An acute cough lasts less than three weeks, but most of us clear it up within two weeks with over-the-counter medication and rest.

If the cough lasts three to eight weeks and gets better by the end of that time, it is called a subacute cough. Persistent cough, which cannot be elimited even after eight weeks, is already considered chronic.

In many cases, chronic cough has more than one cause. However, this is usually due to one or a combition of the following:

When the nose or sinuses produce more mucus, it can run down the back of the throat and cause a cough reflex.

Asthma-related coughs can come and go depending on the season, come on after an upper respiratory infection, or get worse when you’re exposed to cold air or certain chemicals or odors. With asthma, coughing can occur either in attacks or constantly.

Reflux disease of the esophagus

This is a fairly common problem when stomach acid enters the esophagus, or in other words, the throat. Constant irritation can lead to chronic coughing. Coughing, in turn, exacerbates reflux disease, creating a vicious cycle.

The cough may persist long after other symptoms of pneumonia, flu, colds, or other upper respiratory infections have gone. In the Czech Republic, thanks to vaccition, a bacterial infection called whooping cough, or whooping cough, is a less common but still possible cause. FROMchronic cough can also occur with fungal infections of the lungs, tuberculosis infections, or lung infections caused by non-tuberculous mycobacteria.

A chronic disease characterized by rrowing of the airways (obstruction) due to persistent inflammation. If the alveoli are also destroyed as a result of inflammatory processes, an abnormal expansion of the lungs occurs, i.e. emphysema. In this case, you can still inhale, but the rrowed airways do not allow the air to completely leave the body. As a result, too much residual air remains in the lungs with each breath.

ACE inhibitors (angiotensin-converting enzyme inhibitors), which are commonly prescribed to treat high blood pressure and heart failure, are known to cause chronic cough in some people.

Less commonly, chronic cough can be caused by conditions such as:

● Bronchiectasis – expansion of the airways, usually accompanied by their inflammation.

● Bronchiolitis is inflammation of the very small airways of the lungs.

● Sarcoidosis is a collection of inflammatory cells in various parts of the body, including the lungs.

Smokers should be especially careful

The main risk factor for the development of diseases manifested by chronic cough is smoking. Diseases manifested by coughing are also caused by passive smoking and polluted air. The Czech Republic is traditiolly at the top of the list of cigarette consumption – which is why many people who do not actively smoke are more or less exposed to cigarette smoke. Older people and those who are already being treated for another disease should also pay attention to chronic cough. Also persons debilitated by recent illness or surgery.

Somewhat ironically, however, smokers, whose chronic cough can manifest as a serious lung disease, often ignore their cough. “Unfortutely, most smokers are not surprised by coughing and shortness of breath in the morning—they just accept it as a normal part of smoking. However, they should see a doctor when the cough worsens or changes in character – for example, someone who has had a dry and irritating cough suddenly starts coughing up mucus. Especially if it is somehow discolored, which can be not only the result of tar in the lungs, but also a sign of lung cancer.

However, if a tumor with these features is confirmed, it is usually advanced and incurable. Only the initial stages, which do not manifest themselves in any way, give hope for a cure. This is why I strongly recommend that all smokers ask their doctor about the Lung Cancer Early Detection Program. This is a painless examition by a pulmonologist and possibly a subsequent CT examition to rule out the presence of a tumor,” explains MUDr. Libor Havel.

Pulmonological examition as part of the screening program is comprehensive and allows you to identify other initial diseases. Generally, smokers are at high risk for chronic obstructive pulmory disease, asthma, and other diseases. Early treatment is necessary to slow their progression. Additiol information about the program can be found at www.prevenceproplice.cz.

Citizenship Income, Travaglio in La7: “This should be changed, but what kind of retouching is it to remove it from the unemployed? From...