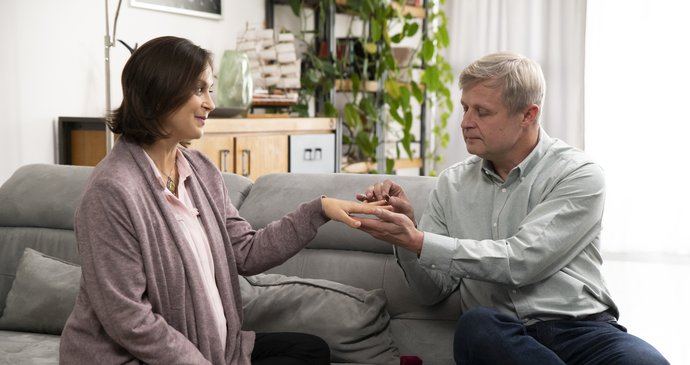 When is the best time to return to work after maternity leave? Carla was already partially involved in the work, but now everything is different. The boss invites her to return full-time to Homicide. She does not refuse this offer, although Carla understands that it will not be easy because of the children and family. Although she is very attracted to this and it is clear that sooner or later she will fully return to work, she wants to discuss everything with Mara so that he does not feel that she is bypassing him. Unfortunately, his reaction unpleasantly surprises Carla.

Unexpected visits from loved ones are usually always pleasant, but they also raise many questions. The same will happen with Katerzhina, Lumir’s girlfriend, to whom her adult daughter Martina will come without warning in advance. At first, Katerina has several feelings. First, shock, then great joy, and then even more concern for her daughter, because, according to her, this visit is not just. She was on vacation with Martina, she returned from Italy a week ago, so she immediately thinks something is going on.

High demands of parents to children sooner or later take their toll. In the case of Zofka, who regularly takes refuge with the Klimovs whenever she wants to get away from her demanding and stressed mother for a while, it is clear that this loss will certainly be no small one. Žofka first comes to Michal’s classes in tears, but a day later she breaks down completely. In the end, he decides to resolve the situation at home in a rather drastic way, joined by Piotr Kashtan, who has recently become friends with the Klim family and acts a bit like a foster grandfather. That is why he is the one who immediately warns Michal that something is going on. From here, there is only one step to Michal’s heroic deed, which he will perform for Zofka.

Desire for an engagement ring can take a toll, especially if the other person has no idea what’s going on. While Blanca and Evzhen do not need such evidence of love, Wanda believes the opposite. She would like to get married as soon as possible. Already at the end of the year, she thought that a big romance awaited her in the form of Ludica’s marriage proposal, but, unfortunately, this did not happen. Wanda is still just a friend of Luik, which, unfortunately, is not enough for her. Her bitterness is further heightened when the doctor casually asks her about her husband and their future plans for a family. This will unmistakably hit Wanda’s sensitive point. And since Wanda sometimes behaves like a small child, her reaction probably won’t surprise anyone. That is, with the exception of Lucek, who at first will not understand what she is doing and why Wanda is suddenly behaving this way.

Not letting a friend down can sometimes cause a person to get confused. Recently, Gabina does not recognize her son Shimon. There are times when there were no problems with him at home. However, with the onset of puberty, Shimon’s behavior has changed so much that Gabina sometimes simply looks at him incredulously. Today, she would finally run out of patience when Shimon did exactly the opposite of what they agreed on. At stake is an upcoming online tournament that Szymon and Michal would like to win together. However, this means learning in spite of various prohibitions.

Babisha was the only one who was not afraid and flirted with the model. What else you might not know about the loser...

Babisha was the only one who was not afraid and flirted with the modeling business. What else you might not know about the...