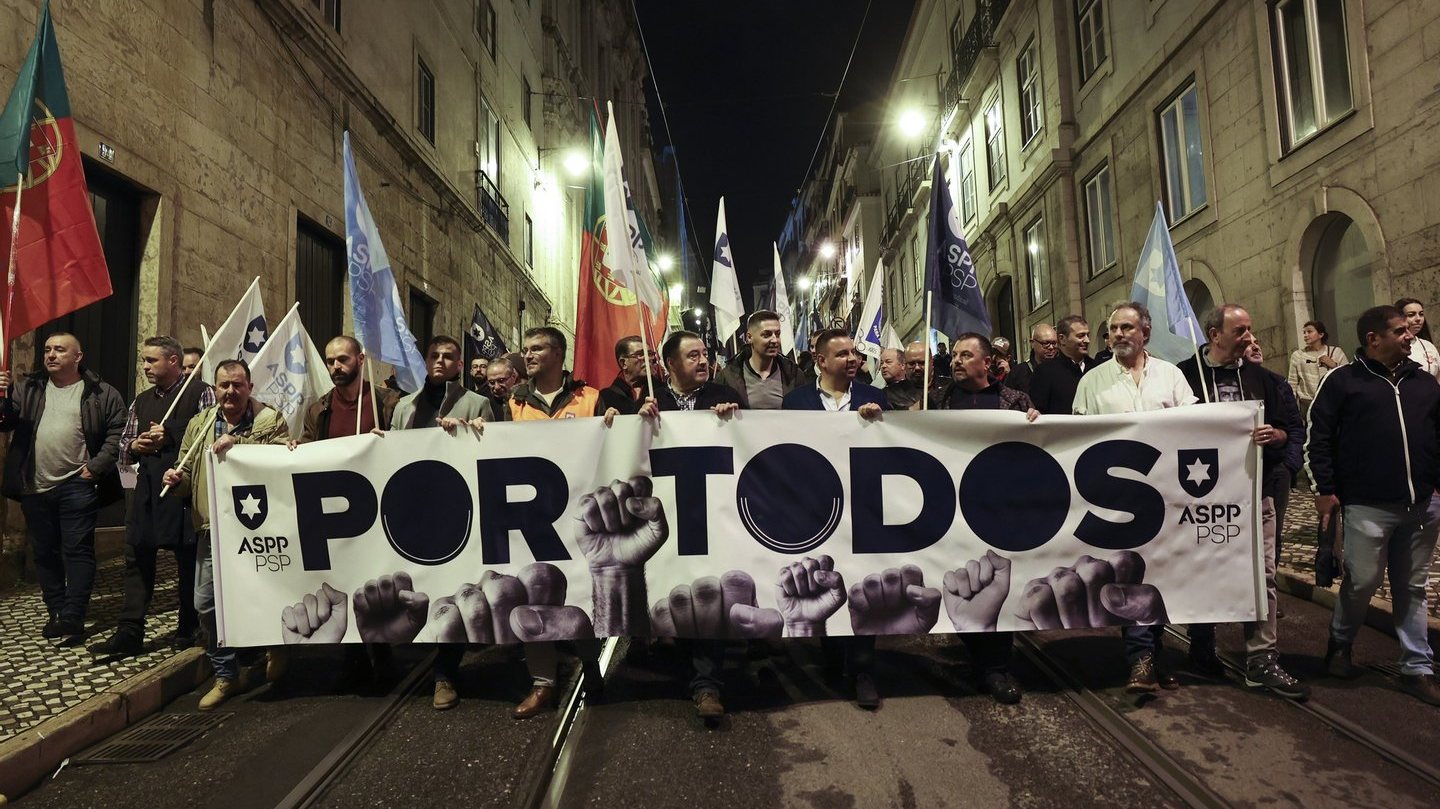 Several hundred policemen march in silence this Thursday in Lisbon to denounce the PSP’s “structural and serious problems” and demand that the government address these problems.

Among the issues that sparked the protest in Lisbon were low wages, aging police officers, unattractive profession, shortage of personnel, disability, health status and retirement age.

During a demonstration organized by the Union of Police Professionals (ASPP/PSP), the protesters left Largo de Camões shortly after 6:30 pm towards the Assembly of the Republic in São Bento.

Some of the demonstrators are waving AFP flags, and protest leaders are carrying a banner that says “Portodos” – a phrase surrounded by images of clenched fists.

The protesters walk the streets in silence, a variant justified by the claim that “Silence says a lot🇧🇷

“This demonstration aims to bring the structural and serious problems of the PSP to the political authorities,” the ASPP/PSP president told Lusa.

Paulo Santos stressed that if the current situation continues, in 2023 these problems “may be transferred to the population.”

As an example, he said that there are already difficulties “with the opening of a simple police station.”

The ASPP/PSP also wants the Minister of the Interior to have “serious talks” with the unions, given that this has not happened yet.

The demonstration is also attended by the Independent Police Union (SIAP), which also rallied with the leaders of the Association of Professional Guards (APG / GNR) and structures that are part of the Permanent Coordinating Commission for Security Forces and Services.

The Minister of the Interior (MIA) recalled this Thursday the “obvious” successes in the careers of the policemen that showed up this afternoon in Lisbon.mindful of a salary increase of around 100 euros and investments in working conditions.

“The point where I disagree with the union and workers’ representative structures is that there are no advances,” defended José Luis Carneiro, who recalled “an increase of the order of 100 euros at the base of a career.”

“Obviously, progress has been made,” he said.

At the end of the opening ceremony of “Espaço Vida – Integrated Assistance to Victims – RIAV”, which supports victims of domestic violence in Loures (Lisbon district), the Minister reminded journalists of the salary increase envisaged in the state budget for 2023 in all police stations. career and investment in the working conditions of officers.

The minister explained that the agents would have “an increase in wages that varies depending on [remuneração base mais suplemento de risco]from 62 to 117 euros”, taking into account all levels of remuneration.

According to the minister, career-based promotions due to hiring agents, This process is hampered by the aging of the population and the demands of the profession.

Asked if he finds a career in the police attractive, José Luis Carneiro said that “one can work in a way that can be improved”, and that is exactly what is being done.

“We are talking about the allocation of another 600 million euros by 2026 to improve the working infrastructure and conditions for the worthy implementation of professional activities,” the minister said.

The Minister of the Interior also recalled that an accommodation and housing program for GNR soldiers and PSP agents is being developed with the municipalities, and that this year the fixed component of the risk premium has increased from 31 to 100 euros.

We also have a question raised by the unions, the agreement that was reached during the troika, about 20% per diem, which will also need to be reviewed and re-evaluated in terms of budgetary spending,” adds José Luis Carneiro.

The Allied Association of Police Professionals (ASPP/PSP) is demonstrating this Thursday in Lisbon against the prolongation of issues affecting the Public Security Police (PSP) and its agents and against the “lack of government political will to address them”. “.

The protest action will take place from 17:00 between Camões Square and the Assembly of the Republic, the Independent Police Union (SIAP) has joined the action.

On October 31, when the demonstration date was announced, ASPP leader Paulo Santos stated that “a career in the PSP is unattractive” and recalled the difficulty of filling vacancies, an aging workforce, excessive overtime. and “a blatant lack of motivation” among agents.