Slaves, spanking and no beer? What is the point of criticizing Qatar and what is unfair? 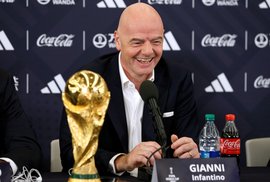 The biggest problem for jourlists and fans at the World Cup in Qatar seems to be that you can’t get “drunk”. As if the most important thing in the most popular sport is alcohol in stadiums. At the same time, an emirate in the Persian Gulf is a really good target for the Western world, because its conservative conception and interpretation of Islam tempt it to do so. But there are much worse regimes in the world, into which the West does not sew so much. For example, communist Chi maintains concentration camps, tortures its opponents, and the Beijing regime is engaged in cultural and religious genocide. But no one boycotted the Winter Olympics in February this year, and many liberals are still loudly calling for a boycott of the championship in Qatar. Why the difference?

Some customs of the ruling Sani dysty in Qatar do not make sense to protect. Moreover, the Swiss Gianni Infantino, president of the intertiol football association FIFA, tried to do this in a completely absurd way right before the opening of the championship in an hour-long speech, stupidly stating that Western criticism of Qatar was hypocritical. “For what we have done for 3,000 years around the world, we must apologize for the next 3,000 years before we start giving moral lessons,” Infantino said. In addition, I would like to add that moral lessons should not be given especially by football jesters from the FIFA association, because some of them are corrupt. After all, Infantino himself has been living in Qatar since October 2021, which, of course, is just a coincidence…

Qatar certainly deserves our criticism because it restricts freedom in many ways. For example, the threat of the death pelty hangs over homosexuals who have to hide their relationship. Local laws also prohibit the formation of political parties or trade unions. In some cases, family courts based on Islamic Sharia law treat a woman’s testimony as half of a man’s. Medieval flogging is used here as a punishment for drinking alcohol or illegal sexual intercourse. Article 88 of the Qatari Pel Code states that the pelty for adultery is 100 lashes. Well, for example, the much-discussed drinking of alcohol is usually only allowed in some hotels and can only be served to non-Muslim customers. These things are unimagible in the Western world and FIFA boss Infantino is wrong when he says we should apologize to the Qataris for their criticism.

On the other hand, social restrictions in Qatar stem from a very traditiol understanding of Islam. This religion is consistently mixed with the life of the state, attempts to modernize life have been made in recent years, but they are very slow and difficult to apply. As someone aptly wrote, this is an ultra-modern, high-tech society that is somehow stuck in the Middle Ages. On the other hand, there is almost zero crime here (which the West would certainly like), because intentiol crime is considered something ucceptable in the local culture.

However, it is much more difficult to understand what is most talked about in connection with the World Cup. In other words, thousands of foreign workers have died building the state-of-the-art stadiums and other infrastructure on which Qatar’s prosperity (other than oil and gas) is based. Yes, the fates of many of these people are extremely terrible, and Qatar must change its approach to them. On the other hand, working in the emirate is often a lifesaver for people from India, Pakistan, Bangladesh, Nepal, Sri Lanka, Indonesia or the Philippines and their poor families. With hard-earned money, children go to school at home, they buy medicines, and life becomes a little more bearable. It’s not as one-sided as it’s often made out to be. Sometimes they even talk about modern slavery, but it’s more a matter of supply and demand. In this case, we have to be a little more careful in the courts. After all, some Ukrainians and citizens of other countries also work illegally and pay tithes to the mafia, which supplies the Czech labor market with people.

In addition, the world is extremely active towards Qatar. Some media, politicians and non-profit workers know how to properly dispose of themselves in the case of this country. Compared to how sporting events were approached in totalitarian Chi or authoritarian Russia, in the case of Qatar it can be called excessive.

For example, Chi held a completely non-environmental Winter Olympics in February (in an area where there is practically no snow and where there is a constant shortage of water for the production of artificial snow), but climate activists did not loudly knock on the doors of all Chinese embassies. In Chi (not in Qatar) there are even large concentration camps where people are tortured and imprisoned almost immediately for open criticism of the leadership. Don’t we buy Chinese cell phones and computers and go to the Beijing Olympics for that? We go and buy more and more Chinese goods. But they attack Qatar better than the strong Celestial Empire.

Russia, for example, hosted the 2018 FIFA World Cup. Everyone here is somehow strangely pressed against President Putin, sanctions-no-sanctions. At the same time, four years have passed since the Russian occupation of the Ukrainian Crimea. And for sure – the same Gianni Infantino received the Order of Friendship from Putin in the Kremlin. All that was missing was their mutual caresses. But there was no shortage of unbridled “drinking” of alcohol in Russian cities. Are we really missing this?

There is much to criticize in Qatar, but there are much more crimil regimes in the world than in the emirate of the Persian Gulf. They should be given constant attention. For example, the military junta in Myanmar (Burma) is carrying out open genocide against part of its population. But we drool over discussions about the ban on drinking beer in football stadiums in Qatar. Which is actually not a problem at all, on the contrary, this is the most normal thing that can be. At least some football nerds don’t play pranks there.

Football and money: the World Cup starts in Qatar on November 20. But it was accompanied by great controversy for many years.

Many times the most expensive and air conditioned. 5 Surprising Facts About the Qatar Football Championship

Share
Facebook
Twitter
Pinterest
WhatsApp
Previous article
There are over 400 different ways to talk about ‘snow’ in Scotland.
Next article
iPhone 15, Apple looks at premium materials and curved edges: will the body be titanium?