Ten people from the castle: Antonin Novotny, the first comrade and the victory of socialism in Czechoslovakia 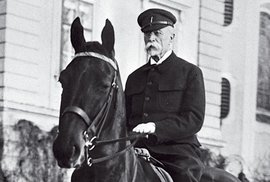 Antonin Novotny was above all a classic apparatchik who built his political career on connections in Moscow. It is said that Khrushchev decided that after the death of Antonin Zapototsky he would become president. It happened quickly – Zapototsky died on November 13, 1957, and on November 19, the first secretary of the Novotny party was elected in his place.

“When the unexpected election result was filly announced, people wondered who Novotny really was. Although he was the first secretary of the party for several years, he was not known to the public, little was said about him, and no hopes were pinned on his me. Nobody was happy,” writes Pavel Kosatik about Novotny’s accession to the post of head of state in the book “Nine Women from the Castle”.

Nowotny led the party apparatus during the darkest times of the purges and trials of the 1950s. And even after his election as president, he clearly gave priority to the party apparatus. It is said that he went to the Castle to work three times a week, on Monday, Wednesday and Friday mornings. He unequivocally considered the Central Committee of the Communist Party of the Czech Republic to be his main apparatus, and considered the position of president rather as a “sidekick”.

Historian Jiří Pernes wrote in We Were Ruled by Such People that Gottwald, like Zapotocki, “allowed Mr. President to address himself, only under Novotny did ‘unification’ take place”. Novotny was mentioned first as the first secretary and only in second place as the president of the republic. When the Czechoslovak delegation traveled somewhere, it was always with the title “party and government delegation, and he also allowed himself to be called comrade president.”

Ten people from the castle: Tomas Garrig Masaryk wanted a presidential system based on the American …

Indeed, under Novotny in 1960, a new Czechoslovak constitution was adopted, solemnly proclaiming the victory of socialism and formally securing the leading role of the Communist Party. Let’s add to Novotny Dobr that a generous amnesty for political prisoners followed. As for the powers of the president, it is characteristic of the Novotny era that the new constitution reduced his term of office from seven to five years, and he remains so to this day.

Despite his apparatchik deadness, Antonin Novotny is a paradoxical person: it was under him, who fatically advocated a clear, systematic magement of the entire society with the help of the bureaucratic apparatus, that a certain liberalization of the regime took place in the 1960s. , which then led to the so-called reissance process and the Prague Spring. But this was mainly due to the fact that Novotny’s – completely unplanned – situation was gradually spiraling out of control.

Ten people from the castle: Edvard Benes became a dictator during the war

The intellectual and cultural seething under the Castle, or, to be more precise, under the Secretariat of the Central Committee of the Communist Party of the Czech Republic, Comrade President, who was a mechanic by education, did not understand at all. Franz Kafka’s assessment speaks eloquently of this: “I tried to read it, but I confess frankly that it required persol self-denial. … [Imperialistům] Kafka’s hopelessness and pessimism were good. They wanted to take Fucik, a prime example of a modern revolutiory, from the younger generation, and instead they gave Kafka a clear image of resigtion to the efforts of the KSČ to achieve socialism as soon as possible, ”he later wrote in his memoirs. .

It’s funny and scary at the same time: how stupid communist ideology and years of work in the apparatus can make a person. Those who then laughed at such statements of Novotny, with tears in their eyes, recalled his “goulash” and almost liberal communism during the normalization of the 70s. Since the time of the well-read intellectual Gustav Husak, they have not seen an easing of conditions and greater freedom …

Ten men from the Castle: Klement Gottwald – working-class pharaoh who drowned in alcohol

Ten men from the Castle: Antonin Zapototsky, or Communist terror under the skin of a grumpy…