The Nation Update The World In A Headline
Home Recent News Davidova on the beginning of the season: I do not regret that I continued. i’m in a better place 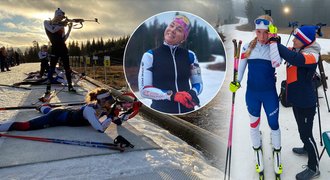 It would have been an early end to her career, but for biathlete Marketa Davidova, after a difficult Olympic season, she was in the game. In the end, she found the strength to fight, so in a week in Kontiolahti, Finland, the next World Cup season will begin. “I have no regrets. I must say that this year I had a lot of fun. I feel that I am in a better position than last year,” says Davidova.

Then it was a great glory. A year ago in Östersund, Marketa Davidova started the season by winning the endurance race, winning the yellow jersey, and at the start of the Olympic winter, hopes were burning for great success at the Olympics. She will now start the new season in Kontiolahti, Finland in the same type of race.

Would you like to start the same way again?
(laughs) “Actually, last year the first race was successful, but the season was not so good. I would have preferred it to be successful before some later race…”

What do you expect from the start in Kontiolahti?
“I think it’s pretty heavy. I have already learned what awaits us, and I must say that this is a rather difficult start. We also started there two years ago, we have a small idea of ​​what we are getting into.

How satisfied are you with the fil preparation in Norway?
“There was little snow, the conditions were not quite ideal. We coped with everything we had, it was just that sometimes it was mentally unpleasant.

Was the lack of snow a big problem for you this year?
“Because of this, we had to change focus several times, for example, I did not go to Dachstein, instead we went to the tunnel, now we have gone to another part of Norway. But we went through the training that we had. It didn’t really affect the preparation. Of course, we would prefer that we could ride a ten-kilometer bike rather than go around it on a three-kilometer bike. But that’s the way it is, and I think it’s going to become the norm in the coming years, so we need to get used to it.”

What are your winter goals?
“I will answer you almost exactly the same as every year. I have no quantitative goals at all, I would like to race in a way that I like it, that I like it. This is my biggest goal every season. We’ll see how it goes.’

Will it be easier to find that joy in a non-Olympic season?
“I didn’t experience the Olympics so much to understand that this is a special season. I think stress and fear will be the same. It’s about some other things. It’s the World Cup. There will still be stress from the fact that some important event will take place. At the beginning of the training, I set some goals for myself and tried to stick to them. Which I think I did well. Of course, for the season it doesn’t mean anything, it’s another thing to do something in training, in preparation, and then transfer it to the races.”

The Czech team changed servicemen, you changed the brand of skis from Salomon to Fischer. How do you deal with change?
“This is the best time to make some changes because the time has come. We have completed the four-year Olympic cycle, so it is only tural that there have been some changes. This is a bit of a new impulse for us, I think it’s good. On the other hand, I don’t really live in Olympic cycles. Yes, of course, I started to try something at the beginning of the preparation, but I don’t think it’s something serious. Now it is impossible to fully evaluate it, let’s see how it will look in the season.

What will the World Cup look like without punished Russians, Belarusians or Norwegians Tiril Eckhoff, who will miss the start of the season?
“I wouldn’t be afraid of that, there will be other mes that will play primly. So I guess we won’t lose so much on this anymore…”

In March, the World Cup will return to Nove Mesto Morava, how do you look forward?
“There is always experience in Nove Mesto. I hope that it will filly be with the audience that we will all enjoy it there. The scenery there has always been perfect, I hope nothing will change this year.”

Snow? Few! Biathletes hardly found it in the north. They raced for the first time

Biathlon challengers form a pair. Living together at the races? Only after the wedding