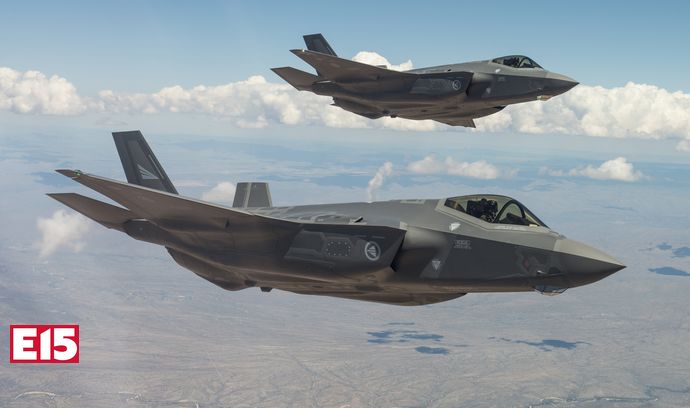 High inflation, fewer orders and technological improvements to aircraft. These are the main reasons why the purchase price of the world’s most advanced F-35 fighter jet will rise after years of gradual decline, said a senior spokesman for US manufacturer Lockheed Martin. Although a possible purchase of twenty-four F-35s would cost the Czech Republic more than fourteen billion crowns, it is estimated that the Czech negotiating team with an American partner continues to negotiate the terms of a possible contract, potentially the most expensive domestic military acquisition ever. The Ministry of Defense confirmed this to the E15 newspaper.

In recent years, the overseas weapons giant has maged to gradually reduce the purchase price of the most modern battleship to date. The astronomical sum of more than $220 million (nearly five and a quarter billion crowns at today’s exchange rate) for the first production F-35 was able to drop below the threshold of eighty million dollars (1.9 billion crowns). However, other manufactured cars will rise in price again, the price will rise again. Lockheed Martin’s director of business development for the F-35, Edward Smith, told DefenseNews.

He attributed the price change to fewer aircraft on order, the impact of the COVID-19 pandemic, and further technical improvements to machines that can carry more weapons or better recognize targets. “When the aircraft is upgraded, the price will go up a bit,” Smith was quoted by the server, who did not specify the rate of increase. According to military alyst Jiří Vojaček, the increase could be ten to fifteen percent, so the cost of one fighter would be about one hundred million dollars (nearly 2.4 billion crowns).

“However, this amount applies only to countries with already built infrastructure, that is, the US and, apparently, the UK. After the price increase, the Czech Republic will pay 160 to 175 million (3.7 to 4.1 billion crowns) instead of $150 million per plane (3.5 billion crowns). So far, we have generally expected further reductions in discounts,” says Woyachek, referring to recent purchases from Finland, Poland and Switzerland. That is, countries that should be in the same position of export customers as the Czech Republic.

For example, Switzerland signed a contract for the purchase of 36 F-35 fighters in mid-September of this year, paying more than six billion Swiss francs (152 billion crowns) for them. Thus, the total procurement costs for the Czech Republic will increase by more than fourteen billion kroons to one hundred billion against initial assumptions. This amount also includes the cost of modifying air bases, training pilots and ground personnel, or security measures.

“Currently, negotiations are underway on possible parameters for the acquisition, production, supply and operation of aircraft. Of course, costs are also negotiable. The Czech government will decide on the possible acquisition of the aircraft after October 2023. We will not specify anything else yet, ”the Ministry of Defense said. Minister Jan Chernokhov’s Department (ODS) did not answer questions about how high the purchase price of one aircraft is for the Czech Republic to negotiate with an American counterparty, and whether it will agree to a possible price increase.

Despite the significant amount, the purchase price is not the biggest competitive issue for the F-35. These are operating costs. “They are many times taller than the Eurofighter Typhoon or F-15. It is estimated that an F-35 flight hour is now worth $35,000 (830,000 crowns),” Voyachek says.

The F-35 has the most powerful engine ever fitted to a fighter jet and, as a result, high fuel consumption. The manufacturer says it aims to bring costs down to $25,000 an hour. “Even this is several times more than Gripens (four to five thousand dollars per hour) or typhoons (up to 20 thousand dollars),” Voyachek adds.

If the Czech Republic did buy the aircraft, it would receive, among other things, contracts for the domestic industry as part of the reward. Enterprises could be involved in, among other things, the production of the F-35 or F-16, Lockheed Martin’s Gregory Day said in an interview with the E15 newspaper. A billion orders will also entail necessary investment in infrastructure; the Czech side would have already paid you. This will require modification of the hangars or runways at the Časlav base.

In addition to aircraft parking, weapons and fuel depots, most of the investment will go to the new runway and security. The systems of today’s most advanced F-35 fighter contain more than eight million lines of code – the most in history – that should not fall into uuthorized hands. This leads to extreme safety requirements in hangars.

The Czech Republic has an existing squadron of 14 JAS-39 Gripen vehicles leased from Sweden until 2027 with a two-year option. The Ministry of Defense gives several reasons why the Gripensy should be replaced with the F-35, citing an alysis of the Czech army.

“Each such aircraft is a flying command post. This is a combition of a fighter, an air defense element, a higher intelligence and communications workplace. At the same time, it is part of a wide network of the Internet of machines, including unmanned ones, and therefore can perform tasks that are completely beyond the capabilities of today’s technologies,” the ministry said in a statement.

Thus, the Czech Republic will share the same technology with the United States, Poland and a number of other allies, which will mean easier cooperation in the procurement of spare parts, training and sharing of service capacity. “It can be expected that in the coming years the F-35 aircraft will become the standard within NATO, which means that it will be acquired by most countries of the alliance,” the ministry added.

Lockheed Martin says more than 550 F-35s are expected to be flying over Europe by the end of the decade. However, it is not known whether this will be due to a reduction in orders by some customers.

Share
Facebook
Twitter
Pinterest
WhatsApp
Previous article
Pruza: People are saving, but the agrarian barons are still lining their pockets. Rising prices for basic foodstuffs is a problem
Next article
Plumber finds one of the oldest known message bottles

ANALYSIS: Life Form! Weimelka named one of the top five goaltenders in the NHL