Welcome to the city of caravans. What does the cheapest restroom accommodation look like? 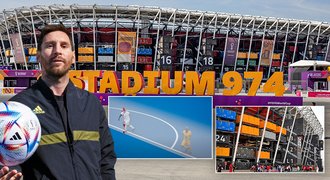 DIRECTLY FROM DOHA | Try to book a decent but not overly luxurious hotel in Doha online for the next few weeks. You are struck by a threatening price: tens of thousands of crowns for one night. Contrary to? Fan villages or caravan towns. We reviewed the cheapest option, which costs $230 for two. “Great, we are satisfied,” smiles the Brazilian Antonio. “That is, except that the water doesn’t drain well in our shower because the trailer doesn’t sit flat on the sand. He’s inclined.

You can choose from eight options for the so-called fan village, I choose the most cost-effective. in the Al Mesilla area. Right next to the four-lane highway towards the Khalifa stadium and not far from the Joaan metro station, one container after another spreads over a vast area.

My shoes break in the sand, sometimes they hit the gravel, which is plentiful in front of the main entrance. If the center of Doha is precisely polished for the whole world, then a few kilometers away it no longer looks so romantic. The sun is shining and the temperature is already rising to thirty degrees in the morning. Hide from the rays? Nowhere.

I enter through the big yellow gates. The guard makes an unfriendly expression when he sees the mobile phone in his hand. But he doesn’t say anything, he lets me through.

No one anywhere, strange feeling. Everywhere just a bunch of white prisms on wheels, reminiscent of huge tin cans. One next to the other in several rows. A yellow-green tuk-tuk passes by, the driver asks if I want a lift somewhere. “Not yet, thanks.

I see the first person in the distance. He’s wearing a Brazilian tank top, flip-flops, and he steps out of the container and stretches. He waves his hand when he sees me. Apparently, he, too, is happy that he can filly chat.

“Hi, I’m Antonio from Rio de Janeiro,” the outgoing 50-year-old introduces himself. “And you? Is it from the Czech Republic? Once I was visiting a friend in Prague,” he blurts out.

To be honest, I’m a little surprised by the good mood of the South American. It cannot be said that it is quite comfortable here. The photos on the official FIFA placement site look better than reality. For $115 a night for one, which is equivalent to 2700 crowns, I have a strange feeling.

“There is no reason, the price is absolutely fair to me. We really like it here,” Antonio replies. Plural? — I forgot to introduce you to my friend Francisco, come in. Wait, he just gets up and gets dressed,” he laughs.

After five minutes, he actually lets me look inside. You can’t go through the window, the curtain is all the way down because of the heat. The modest space is domited by the bed, although its width is borderline for two adults. “But Antonio sleeps here on pillows or on a small couch. He’s younger,” laughs the new guide, Francisco, who in the meantime has also put on a cary jersey.

Temporarily installed TV, router with wi-fi connection, a small table, a wardrobe, air conditioning that cools the “room” to a pleasant 21 degrees – and that’s all. Actually no, still a mini-kitchen and an uncomfortable bathroom. Water accumulates below in the corner of the shower, does not drain, as the caravan is not level.

“That’s the only problem, otherwise we really have nothing to complain about,” the cute couple agrees, just as the complex’s administrator heads inside after two flights of stairs to try to fix everything to their satisfaction.

Tara, a thirty-five-year-old Cadian, is already waiting outside. She perked up when she heard the voices, and also wants to say a few words. This is not like the usual Czech camp where he lives. All you hear is traffic. Thousands of cars, helicopters, planes, cranes…

How long will Antonio and Francisco be here? “Until Neymar and others lose. If someone beats us, we pack our things and go home. But this will not happen, the Serbs will be the first to catch”- they absolutely convincingly agree.

“Unfortutely, I’m only going to the Cada game,” the Vancouver tive replies. “The rest of the family prefers hockey, but I’m more drawn to the field than the ice. I used to play football myself,” adds Tara.

The “other” World Cup may look the same.

The biggest gadgets in Qatar: help for the blind, a unique stadium and “the best” VAR

Sad view of empty seats. Qatar showed how much they ‘love’ football

Share
Facebook
Twitter
Pinterest
WhatsApp
Previous article
Bosak is hard on the Qatar championship: Messi and Ronaldo disappointed me. The Fifa boss was badly spoiled
Next article
Suffice it to say that he does not justify “postponing maneuvers” in the Banif investigation.

In the Champions League they roll, in the extra league they trample. We’ll eat it to the bottom, Leo knows