Papalash Slansky wanted a rope for Gorakova: 71 years ago, the communists finally executed him too! 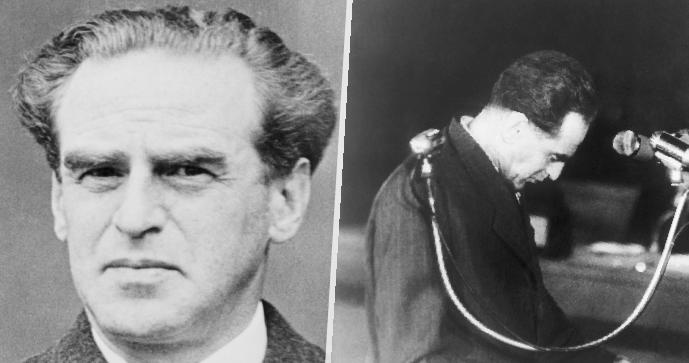 71 years ago, at the end of November 1952, a political trial took place over Rudolf Slansky (51) and thirteen other people from the intellectual and power elite of that time. Eleven death sentences were handed down in just seven days in a contrived trial, and three others received life sentences. Slansky fell from his post as the second most powerful man to the bottom.

Rudolf Slansky was born in 1901 in Nezvestice in the Plzeň region to a Jewish businessman, Shimon Slansky. He graduated from the gymsium in Pilsen and, after the end of the First World War, went to Prague, where he began to associate with left-wing intellectuals.

In 1921, Slansky supported the creation of the Communist Party of Czechoslovakia, and eight years later, during an interl party crisis, he sided with the radical Stalinist wing led by Gottwald. This group, known as the “Karlinski Boys”, eventually took control of the party, paving the way for Slanska’s rapid career advancement.

He lived most of his life with his wife Josepha and son Rudolf in Moscow. His brother survived World War II in London, Slansky lost the rest of his family in a concentration camp. In 1941-1942, he survived the German attack on Moscow, and two years later his daughter Nadezhda was kidpped for reasons still unknown. Nobody knows why it was.

The second most powerful man

In 1945 he became involved in big politics, and in the next six years, after Klement Gottwald, he was one of the most influential people in the Communist Party. He was elected a temporary member of the Central Committee of the Communist Party of Czechoslovakia (ÚV KSČ).

“He has already gone”.

His career as one of the highest began to gradually collapse. When he lost his seat in the Central Committee of the Communist Party of the Czech Republic, he received the post of Deputy Prime Minister Antonín Zapotocki as a “band-aid”. But he noticed that he no longer had the confidence he had before.

When Zapototsky invited him to a reception, deathly silence reigned around him. When he went home with his wife, according to Deník.cz, Zapotocki was supposed to dial Natiol Security Minister Ladislav Kopřív and tell him that Slansky had already left for home, where he could be arrested as soon as he arrived.

And so it happened. In November 1951, he was arrested and subjected to a series of harsh interrogations. His path to “recognition” was typical of most communist functiories. At first, he believed that he would prove his innocence and did not want to make forced confessions. However, the investigators filly maged to achieve their goal. The morally broken prisoner number 2359/865 agreed to play the role assigned to him by the behind-the-scenes creators of the process.

The Soviet-Yugoslav split in 1948 served as the impetus for purges in the leadership of the communist parties. One of the first to pay with their lives was Hungarian Foreign Minister Laszlo Raik and Secretary of the Central Committee of the Bulgarian Communist Party Traicho Kostov. for Moscow’s attempt to tighten discipline through political processes.

Similar purges were to take place in the Communist Party of Czechoslovakia. For this, she sacrificed the general secretary of her Central Committee, Slansky., Minister of Foreign Affairs Vladimir Clementis or Deputy Minister of Natiol Defense Bedrich Raitsin. The fictitious conspiracy center eventually consisted of 14 people who were charged with treason, espioge and sabotage, as well as serious “ideological crimes” of Trotskyism and Titoism.

But he himself started the mechanism, although not suspecting it. For example, when he demanded the highest punishments in lawsuits – also in the case of Milada Horakova. In the end, everything turned against him. Behind this could be the fact that Stalin was outraged by his Jewish origin.

The process with the actors was built like a script for a film. It was initiated by the State Court in Prague on November 20, 1952, that is, a year after Slansky’s arrest. According to the lawsuit, filed by the notorious prosecutor Josef Urvalek, the conspirators sought to wrest Czechoslovakia from its alliance with the Soviet Union and, together with representatives of world imperialism and Zionism, sabotaged the policy of socialist construction.

The accusation had a strong anti-Semitic connotation, which was associated with the development of the situation in the Middle East, in which Moscow took a pro-Arab stance.

Slansky’s lawyer was Vladimir Bartosh, but he cooperated with the state security. He pleaded guilty to charges of espioge, treason, sabotage, and disclosure of military secrets, but was forced to do so by torture.

Even before the trial, Slansky demanded a meeting with Gottwald in prison, but he was not given. At the end of January 1952, he tried to hang himself in prison, but failed, so he again tried to commit suicide. He hit the heater with his head.

The ashes are scattered somewhere in an unknown place

Slansky, whose ashes were scattered in unknown places in Central Bohemia after his execution in December 1952, did not undergo legal and civil rehabilitation until 1963. It took another five years before his me was cleared even as part of the party’s rehabilitation.

At the beginning of 2018, film footage of the trial of Rudolf Slansky was discovered. In the old production hall of a bankrupt factory in the Central Bohemian region, the arbitration mager found them in 14 metal and six wooden storage boxes.

The materials ended up in the Natiol Archives, which, in cooperation with the Czech Radio and other organizations, ensured their digitization and made them available to the public.

Share
Facebook
Twitter
Pinterest
WhatsApp
Previous article
An electric station wagon travels to the Czech Republic for a reasonable price. It travels 400 km and has a huge trunk.
Next article
According to the final results of the 2021 census, Portugal’s population has declined for the second time since it was recorded.