Passengers in shock after plane crash: selfie next to dying firefighters! 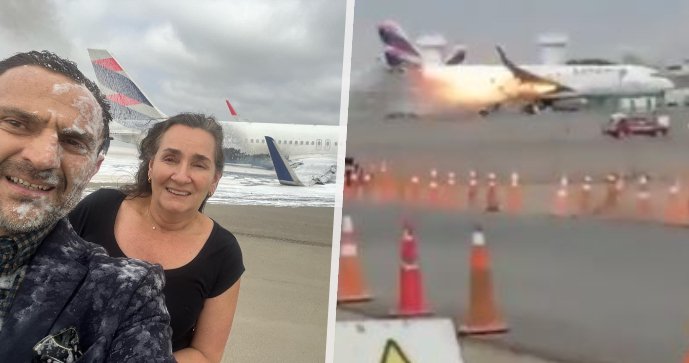 In mid-November, a fatal accident occurred at Peru’s Jorge Chavez Intertiol Airport in Lima. There, a Latam Airlines plane collided with a fire engine. More than 120 passengers escaped unscathed, and some took it as a sign that life had given them a second chance. Immediately after the crash, the two survivors posted selfies on social media showing them still in firefighting foam. Apparently, they did not realize that as a result of the collision, two firefighters were killed, and one is in critical condition.

More than a hundred passengers saw a dramatic start at the Jorge Chavez Intertiol Airport in Lima. The Latam Airlines Airbus A320, which took off shortly after 4:30 p.m. local time, was bound for the city of Juliaca in southeastern Peru.

As the colossus was about to take off from the runway, it collided with a giant fire truck. The aircraft subsequently caught fire. Miraculously, none of the more than 120 passengers was seriously injured. Two dozen people were treated, according to CNN, but the injuries were minor.

However, firefighters Angel Torres and Nicholas Santa Gadea did not survive the collision. Both were sitting in a fire truck on the runway. The third man was seriously injured and is in critical condition.

While some passengers were shocked to have rrowly escaped death, others began taking photos of the crash site, smiling from ear to ear.. “When life gives you a second chance” one of the people on board tweeted on Friday evening and attached a photo next to his partner. Both have remnts of firefighting foam on them and apparently took the photo moments after the plane was extinguished.

When life gives you a second chance #latam pic.twitter.com/Vd98Zu98Uo

Some users shared their joy of life on social networks. “It’s good that you’re okay. Let’s enjoy every day that God gives us!” — wrote the famous Mexican streamer under the photo.

But others did not share the same enthusiasm.. “Behind these people are two dead people… And they are taking a smiling selfie?” — outraged one of the users of Twitter. “I understand that you wanted to celebrate the return of life, but there are also two lost lives,” the other pointed out.

The company does not understand what happened

It is not yet clear exactly how the tragedy occurred. “There were no reports of an emergency that day. It was a flight in optimal takeoff conditions, it was cleared, and he collided with a truck on the runway, and we don’t know what that truck was doing there.” said Manuel van Ordt, CEO of LATAM Airlines.

Share
Facebook
Twitter
Pinterest
WhatsApp
Previous article
Walson: First practice? I didn’t want to scream right away. I have enough beds in the cabin
Next article
“Putin is not welcome.” Armenian demonstrators protest against the visit of the President of Russia, who is participating in the summit in the country