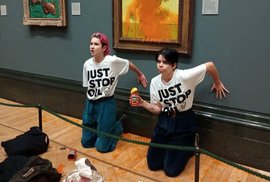 Every revolution needs its own philosophical base, on which to lean, to quote smart phrases from smart people from it, make it a subject in college and refer to it. Therefore, it should come as no surprise to anyone that the representatives of the current green carbon revolution also have intellectual resources from which they draw class hatred. Just like when the communists needed their Marx, Engels and a little bit of Lenin.

The current intellectual well from which the leading green revolutiories are greedily drawing is called the no-growth philosophy. It’s basically simple: in order to calm the climate, a society based on the market, economic competition, wealth, just capitalism must scale back and forego constant growth. People in a non-developing society will live more modestly, but will be rewarded with a stable climate and happiness. (Note that the happiest societies logically achieve even negative growth in the long term – for example, North Koreans, Afghans, Sudanese, etc.) Private property will be limited, whoever needs what for persol needs, let Share.

But it’s easy to say, but harder to organize. Fortutely, we have wise heads in Brussels who will soon introduce the theory of neurasthenia into European directives and laws! A never-growing paradise in sight. Nearly. Every good idea, revolution begins to stumble if it is introduced into a new, better life. For example, when communism replaced capitalism, heads fell and blood flowed. And when does growth give way to growth? Let’s try to imagine how such non-growing problems (not to be confused with growing ones!) Will look like in a few years.

Another monthly meeting of the company Koště, lopaty, smetáky, attended by the company’s magement. He takes his word director Novak. He is red with rage. “Can you explain to me who made us do another thirty percent over budget last month!? Behind my back, the presentation clearly shows that if this continues, then in December of this year we will be forty-two percent above the plan!? So what is this? This is a bummer!!! In January, we can expect an overdraft from the fincial account, non-growth (colloquial term CPU of non-growth) and what shall we do? Slipping into the unemployment office!

He takes his word Head of Marketing Closek: “Mr. Director, we also do not understand the interest in our product. In October, we launched a contextual MD8 broom campaign on networks and on TV so stupidly that we were sure that the competition from Purity, half zrádvo would win us over. But they had an even dumber campaign than ours…”

Directed by Novak: “In quality? After all, we hired the biggest idiots on the market in marketing who were recommended to us by the staff. What are we paying them for? Or are we not paying? It pisses me off too … For people to buy us brooms?!

Talc: “Boss, I’m sorry. The Christmas campaign is going to be so stupid that nothing compares to it. You can’t see our goods and everything happens in a disgusting dump … And I will try to look for even bigger animals than there are in the department. Including me”.

Directed by Novak: “I hope … And now to the money. How do we have so many? Do you want the Guardians of the Green Revolution to whitewash us here with baseballs, as they recently did in the paper mills across the street, where they maged to sell even more waste paper than they produced? Do you really want it?

Marek Stonisch: Forward, glue, not one step back!

CFO Martinek: “Sorry, but it’s not our fault. If the distribution did not distribute so much, we would not have so much money. But I have already sent subordites to creative accounting courses. We will create secret funds, where we will divert some of the money, then withdraw small amounts and filly burn them.”

Directed by Novak: “Good idea. And now the sale. What if we raise prices so much that our products become so uvailable that no one else will buy them, and we will go into decline?”

Sales Director Philip: “We’re working on it, boss. We are still toying with the idea that we will lower the price so that we have a negative markup on the product and it would not be profitable for us to sell at all. We alyze what is more disadvantageous.”

CFO Martinek: “But that’s the other extreme. People won’t have money for food, housing, clothing, and so on…!!

Directed by Novak: “Well, then you have to choose: Either happiness, or a calm climate, or growth. Should I vote?

How was the vote? OK good.

The difficulties of the undergrowth will be overcome!

Cyril Höschl: Today’s totalitarian practices do not come from the East, but from a country that was…