A visitor dishonored a Mayan pyramid in Mexico: an angry mob rushed at a tourist! 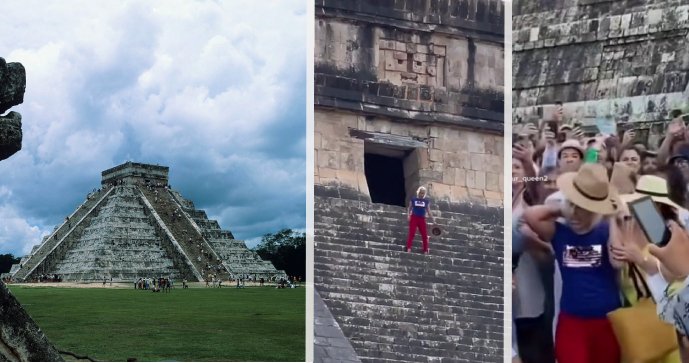 The ruins of the Mayan city of Chichen Itza are located in the Mexican state of Yucatan near Cancun. It is an important monument visited daily by thousands of tourists. There was a big stir recently when a visitor decided to climb one of the pyramids and dance and show off at the top. Then, when the guards forced her to leave a precious memento, the woman was attacked by an angry mob.

The Mayan ruins are the second most visited archaeological site in Mexico, it is a UNESCO World Heritage site, and in 2007 it is also included in the list of the modern seven wonders of the world. The most famous building of Chichen Itza is the Pyramid of Kukulkan. This is a Mayan temple med after the god of the sun and sky.

It was this building that attracted the attention of the irreverent blonde. She decided to climb to the top of the pyramid, where she danced and performed until security forces forced her back down.

The ippropriate behavior of the tourist angered other visitors to the archaeological site, and they attacked the woman. They scolded her, pushed her and poured bottled water over her.

The whole incident was filmed by many visitors and literally became a hit on the social network TikTok. Many users are outraged by the behavior of the tourist. They note that this is a great disrespect for the historical monument.

According to the British newspaper The Sun, people who enter the temple illegally face a fine of up to 100,000 pesos, which is more than 121,000 crowns. However, the Mexican authorities have not yet reported the incident.

Share
Facebook
Twitter
Pinterest
WhatsApp
Previous article
ONLINE: Ukraine was left without electricity after the Russian attack. And according to the Kremlin, Kyiv can end the suffering of people
Next article
Former Apple executive on iPad: ‘Nobody knows what it’s for, it’s limited’