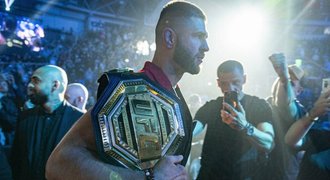 What exactly happened and what will happen next with Jiří Prochazka? Questions that almost every MMA fan asks. The Czech samurai had long considered taking on Glover Teixeira on Dec. 10 in Las Vegas despite his injury. However, an MRI confirmed his worst fears. If the former UFC light heavyweight champion were to fight today, he would be risking the end of his career. “We consulted leading Czech doctors and compared it to the situation as if he went to the match with a broken leg,” Michal Schauer, a member of the wrestler’s team and his longtime friend, told iSport.cz.

Prominent Cadian-American MMA jourlist Ariel Halwani, shortly after the cancellation of Jiri Prochazka’s fight with Glover Teixeira at UFC 282, provided additiol information about the whole situation. “About a week ago, Jiri Prochazka seriously injured his shoulder in Las Vegas. However, he wanted to fight, he said he would fight with one hand. But the doctors told him that he could damage his shoulder permanently if he fought the injury,” Halwani said in a video on social media. “An operation is needed, and Jiří will be out for at least a year. If you add a six-month break after the last match for the title, you get a year and a half. After discussion, the UFC realized they needed to move on and vacated the title for the rest of the division.”

This information is also confirmed by people from the Prochazk team, but they do not agree with the forecast of a year-long break, which is influenced by the point of view of the American health system, where longer estimates are preferred to avoid possible legal “showdowns”. .

“The injury occurred at the end of last week during wrestling training, Jiří hit his shoulder hard during a throw and unfortutely damaged it,” Michal Schauer told iSport.cz. “The first days you had to wait to see if the shoulder would get better, because Jiří still wanted to fight. He ended up in a rehabilitation center, but then the MRI itself showed that it was bad and that he would not be able to fight.”

“We consulted with leading Czech doctors and compared the situation with the situation as if he was going to the match with a broken leg. It’s just not entirely possible. That is, even if he maged and maged, it would most likely have irreversible consequences. He will have such an operation, he will not be able to do anything with it for three to four months. Then he returns to training and then to the match. It’s better than risking your career,” adds Schauer.

Thus, Proxas’ immediate career plans were ruined. But his environment helps him deal with the situation in the best possible way.

“They keep the team together. After all, this is not the first serious injury; at the end of 2016, Jiří damaged the ligaments of his knee, and also underwent surgery and a long recovery. He recovered and came back stronger. We strongly believe in a similar scerio this time too,” Schauer said.

And how, according to Schauer, do Czech samurai deal with the current situation? “Jiri is a real warrior, and this is not just a phrase, it is the truth. I feel like we take it worse than he does. Of course, he is disappointed, he was preparing for another very important match and gave a lot for him. But he also understands that health is above all else and knows what needs to be done to get back to full strength as soon as possible.”

Of course, the entire team was greatly affected by the situation. “I feel sorry for him mostly, because when you sacrifice so much for something and live completely for it, and then something like that happens, it’s a big blow. But, as I said, he is a warrior, he accepts the situation for what it is, and we all know what needs to be done to make sure everything is in order, ”Schauer continued.

About the UFC approach

In his speech, Halwani also critically assessed the situation as a whole. “They (UFC) also spoke with Glover Teixeira and he received an offer to fight for the vacant title on December 10 against Magomed Ankalaev. Even based on how long he has been “in the game”, Glover decided that he did not have enough time to prepare for Ankalaev, because this is a completely different opponent, ”the jourlist said.

“He asked why he couldn’t fight Jan Blachowicz, but the UFC said, ‘No, we’ve seen this before. Yan is in his old age, we need Ankalaev.” Glover said, “OK, let’s have a title fight together in January in Brazil.” The UFC refused because they need a title shot on the December card. Glover admitted that he cannot take the fight on short notice (at the last minute), he needs to prepare longer. That’s why they chose Ankalaev vs. Blachowicz. Jiří will be out for a while, Glover hopes he will then face the winner, but there are no guarantees yet. He is very dissatisfied, frustrated, disappointed and thinks that if he got a few more weeks it would be a fair offer. He also thought Yang was against it. Glover II will also be a bigger match in December. Unfortutely for him, the UFC is not going in that direction. So, let’s sum it up: Jiří left, and the match between Ankalaev and Ankalaev is ahead. Jan Blachowicz for vacant title Dec. 10. Let’s see how things go with Glover. This is the story of UFC 282,” Halwani added.

However, Prochazka’s team does not complain about the actions of the organization. “Very professiol. Once again they show that they really coped with all the situations that this sport brings. They immediately organized all the necessary examitions and consultations for Jiří and are ready to cover the costs associated with any operation and the recovery itself,” said Schauer “The UFC has the best team of doctors who know exactly what an athlete needs, and for this reason, Jiri is considering undergoing a procedure and subsequent recovery in the United States.”

It is still unknown even when Prochazka will return to the Czech Republic.

“It depends on the next steps. Now we are consulting about the operation already mentioned and where to do it, whether in the USA or at home in the Czech Republic. It is more difficult because we need the best care and the fullest possible recovery. If we choose the USA, the return is likely “will be in a few months. If the operation is in the Czech Republic, we will return after the UFC 282 gala, as origilly planned,” Schauer added.

According to Team Prochazka’s ideal scerio, we will see the best Czech MMA fighter in the UFC cage in September.

Morning for a walk! He got injured and vacated the title. Fucking bad, UFC boss said

Prochazka said how long he would be away: Then I will take the title, whoever has it!

Share
Facebook
Twitter
Pinterest
WhatsApp
Previous article
ASUS ROG Phone 6 on Unieuro for Black Friday: 25% off
Next article
A revolutionary weight loss drug is available in the Czech Republic: who can access the treatment and how quickly do the extra pounds disappear?