Kalousek on political stalemate in Prague: party chairmen should intervene 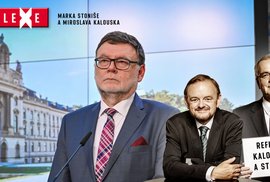 Stan Ovshinsky: An American “Zimrman” who didn’t care about money and invented technology…

The road to the stomach is long

Zeman’s last party will be big. There will be prostitutes at the award ceremony,…

Kalousek on political stalemate in Prague: party chairmen should intervene

Kalousek on public fince: What really? The proposal of the government in the lower house, or the new Stanjour…

Kalousek in reflection: Babiš will not attack his presidential opponents, but the government

Stanislav Balik: Czech democracy is not self-confident. Freedom does not mean archy

Passions against capitalism. The atmosphere of a generatiol war created around the climate strike is vexatious and destructive.

November seventeenth at another time. The Paradoxes of Celebrating the 33rd Anniversary of the Fall of Communism

Kalousek: The new budget is the right step, but the government is waiting for systemic reforms of health insurance and pensions

Kalousek in reflection: I bet that Babis will not run for president

Kalousek: We can be sure that the Czech PM was a communist whistleblower

Miroslav Kalousek in Reflections: Government must not succumb to pressure for sweeping measures

Move your site to inPage easily and hassle-free

PHOTO: 38 famous (former) tennis players. Who has (or had) a home…
(SportRevue.cz)

PHOTO: Bayern is a little different. Does anyone in the club have…
(SportRevue.cz)

A revolutiory weight loss drug is available in the Czech Republic: who can access the treatment…
(Blesk.cz)

Ten men from the Castle: Klement Gottwald – working-class pharaoh who drowned in alcohol

Both participants in the discussion agreed that the situation is being blocked mainly by the pirates, for whom Zdeněk Hřib has been the mayor of Prague for the past four years. Kalousek even perceives the fact that Prague does not yet have its own new government as a betrayal by the pirates. If not for their strategy, according to him, there could have been a coalition in Prague long ago according to the plan of the ruling parties. In this context, Kalousek refers to the situation after last year’s parliamentary elections, when the Pirates won three ministries, although only four Pirate MPs were elected to the Chamber of Deputies. “It is the unwillingness of the pirates to behave in Prague as generously as the other coalition parties at the government level treated them at the time,” he says, adding: “The Prague pirates, led by Mayor Hřib, refuse to recognize the will of the voters and want to gain an arithmetical advantage , by accepting Jan Chizhinsky into the party, or rather into the Alliance, Prague. Thus, they will be at a significant disadvantage,” says Marek Stonisch. At the same time, he points out that the situation in Prague is not as deadlocked as it might seem at first glance: “The TOGETHER coalition can form a coalition with the ANO movement, programmatically this will probably not be a problem.” The voters of the TOGETHER movement in Prague would not forgive their politicians for this. This would hurt all the ruling parties, because they went to the elections to the Chamber of Deputies with the idea of ​​excluding a coalition with the ANO,” he says.

“The problem, however, is that the Prague voters did not decide in the elections in accordance with this ideal, but, above all, they rejected four years of piratical chaos in the city’s leadership. They demand a serious and pragmatic government after the new one,” Stonish disagrees. “I am convinced that the moral ethos is at the very bottom of the list of values ​​in accordance with which Praguers made decisions in elections, the right was definitely the first,” he believes.

Miroslav Kalousek argues that, based on his previous experience in high politics, in a post-election situation similar to the one in our capital today, the tiol party chairmen would quickly meet and the Prague coalition would be agreed very quickly.

What further concrete steps should the representatives of individual parties in Prague choose?

What does Miroslav Kalousek think about the leader of the ANO movement, Patrick Nacer?

What was he thinking when he met outgoing mayor Zdeněk Hřib at the November 17 anniversary celebrations?

Miroslav Kalushka and Marko Stonish, the actors of today’s edition of the regular Reflexe program, were looking for answers to these and other questions.

Kalousek on public fince: What really? The proposal of the government in the lower house, or the new Stanjour…

Kalousek in reflection: Babiš will not attack his presidential opponents, but the government

Share
Facebook
Twitter
Pinterest
WhatsApp
Previous article
Comet Black Friday: Samsung smart TVs and wearables available for half price
Next article
Pd, Orlando takes time: “Apply for me? The topic is not names, there is a risk of weakening the Constituent Assembly, which is already under the threat of a short circuit”