Go solely for injury: I suspected something was broken. Let’s go, win! 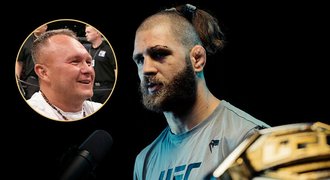 Straight and clear. This is exactly what Jiri Prochazka answers. So, in an interview with the Sport newspaper and the iSport.cz website, he does not hesitate to admit that he is slightly annoyed by the current situation. But you certainly will not hear how he prays to fate. The Czech samurai, who was forced to cancel his fight with Glover Teixeira due to a serious right shoulder injury and thus forfeited the UFC light heavyweight title, already has a clear plan in mind. “I don’t know how I will feel until the next match, but I will do my best. And I will do this day in and day out to take back what is mine,” says the 30-year-old fighter, who remains a champion for Czech fans, decisively.

How are you currently feeling?
“I feel great, as always. Maybe I’m a little angry … But I think that everything is as it should be. I believe in a better future, because I feel my potential, the potential of our team. And when I see wrestlers and everything that happens around the fight, I believe I can make the most of this time just to get stronger and more dangerous.”

What exactly happened during training that caused such an injury?
“During sparring, I made an elementary wrestling mistake, and my opponent threw me to the side, right on this shoulder. The paradox is that after consulting with Dr. Kolář (recognized physiotherapist Pavel Kolář), who knows what condition my shoulder was in before I came here and what it has been for the last five years, then, according to him, there is nothing special anymore. happened”, I just finished what I planned. So now we’re just going to fix what I already had, like an old problem I’ve been dealing with.”

The main and title fight of the UFC 282 tourment will be the fight between Jan Blachowicz and Magomed Ankalaev. What do you think?
“It is absolutely logical that the organization made this match the main one. I was a little unhappy that I would have to give up my diploma. But I did it because I was promised that as soon as I returned, I would get a chance to fight for him. Based on this information, I am completely in favor of not delaying this and letting the organization and the entire launch run its course. That’s why I vacated the title after the agreement with the UFC.”

Jiri Prochazka suffered a serious shoulder injury. Out of respect for the athletes and the division, he will vacate his title.@JanBlachowicz against @AnkalaevM it’s your new main event for the undisputed UFC LHW belt! pic.twitter.com/CScRxmjWwS

What do you expect from Blachowicz vs. Ankalaev of course?
“Whoever wins, or whatever the light heavyweight division, I’ve always been about putting on the best performances and being the best champions. Now I have to retire and work on myself. And when my time comes, I will come for the title and everything connected with it.

Did you communicate directly with your opponent Glover Teixeira?
“Not yet. But I will definitely contact him. As for our match, we’ll see when I return, what will be the situation in our division. And I’m looking forward to it.”

What do you think about the negotiations between the UFC and Paradigm Sports, the company that represents you in the world?
“I can’t complain about anything. Together with my mager Tim Simpson, who I’m in touch with on a daily basis, we solve everything absolutely clearly and quickly. Everything works as it should. So, as far as the team and how they do their job , I am very glad”.

How do you spend these days?
“I’m trying to rehabilitate myself, to cool down. I also go to a pressure chamber (or decompression chamber – this is a large pressure vessel that can be sealed and create an overpressure of several atmospheres). I also use various infrared lamps to disperse the blood and reduce swelling. And all possible healing processes. The main thing will probably start when I’m in the Czech Republic, and let’s go!”

Is it likely that you will stay for the operation and subsequent recovery in America? Can you imagine being away from home for so long?
“We discussed this issue a lot with my team and acquaintances. I let it go through my head. And, probably, the best option would be to stay in the Czech Republic, given that my team is connected with the best specialists in the Czech Republic, led by Pavel Kolář and others. I believe that we can fully handle procedures and recovery at home. I was offered the best UFC opportunities, medical opportunities here in America, but after a longer discussion with specialists, I believe that this is the best solution to come to the Czech Republic and mage it there.

You considered the match even with an injury. What did you decide?
“That’s the most difficult question. I’ve considered this option a lot. A lot. I know how I felt after the injury. Right after it happened. And I have to say that even now I was thinking about jumping into the match somehow. … Because it annoys me. I believe in winning under any circumstances. As for wrestling, I have already been injured many times in matches, sick, exhausted. With all sorts of difficulties, and he came to a victorious end. But I do not regret about my decision.I have already given my word and I think this is the best thing I could do at the moment.As I have said many times, once I get to a full workout… And it’s not just about a full workout! “, then for me this day begins preparation for the next fight. Before the match – this is after the match, and after the match – this is before the match. My whole life is training. This is a reason to rejoice and not hang my head. Because as soon as a person accepts it is a victorious attitude, no losses or hardships can change it. This attitude is life itself, moving forward. I am change. I don’t know what I will be like in the next match, but I will try. And I will do this day after day to take back what is mine.”

All the MMA fans in the Czech Republic are thinking about you now, do you have a message for them?
“I would like to thank you for all the positive news and all the support I receive from all over the world and especially from the Czech Republic. I really appreciate this. As I said, this is not the end, this is just the beginning of something new and big. I knew that if I set a different goal in life, a different goal in terms of a career in MMA, then it would be for a reason. I knew something revolutiory was coming. I didn’t even know it was like this. But I take all the difficulties in life as a challenge to strengthen my mind, my spirit and win. Thanks a lot for all the support. We are going to! Victory!!!”

Coach Prochazka: He couldn’t move his shoulder uided, but he still wanted the match