Trip tip: Osek invites you to visit the Cistercian monastery and romantic ruins. 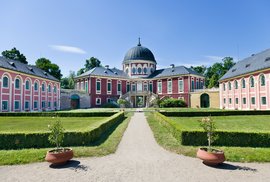 To the north of the Mostetska Basin, the panorama of the dark forests of the Ore Mountains is combined with the torso of a medieval castle and a beautiful baroque mostery complex. And if sightseeing isn’t your thing, you can hang out at a local brewery and spend the day tasting Ossegg’s specialties.

The Podkrushnogorsk town of Osek is located in northern Bohemia, about ten kilometers from Litvinov. It was origilly founded as a settlement near a Cistercian mostery at the turn of the 12th and 13th centuries and served as the home of this mostic order until the beginning of this century. The mostery complex is undoubtedly the most valuable monument here, but besides it, you can also visit the nearby ruins of the Ryzmburk castle, the memorial to the victims of the explosion in the former coal mine, or at least take a refreshing dip in the Ossetian brewery. .

Around 1197, the Osieck mostery became a refuge for monks who moved here from the Bavarian mostery in Waldsassen. They were offered asylum by Slavek from the North Bohemian family of Grabišice, who, by the way, was the highest chamberlain of King Premysl Otakar I and enjoyed his great favor. Over the years, the Grabišić family left the construction and development of the mostery to the monks and devoted themselves to the construction of their residential castle Ryzmburk. Thanks to Slavek’s friendship with the king, the mostery was promised royal protection, as well as the then Pope Innocent III. interested in his work.

The origil mostery was built in the Romanesque-Gothic style. During the 13th century, the territory was expanded with several other mostic buildings, and the grandson of Slavek himself became the abbot here, which provided an influx of funds, thanks to which the mostery could continue to flourish. Later, unfortutely, it was looted and burned during the Hussite wars, and in the 15th century it even became part of the property of the Archbishopric of Prague, which wanted to destroy its Cistercian identity. However, fortutely, around the middle of the 16th century, the activity of the mostery was restored. At that time, the abbey was also rebuilt in its current baroque style. The famous architect of Italian origin Octavio Brogio took part in the projects.

Travel tip: Veltrus behind a baroque castle and remnts of Egyptian classicism

At present, the vast territory of the abbey includes the Church of the Assumption of the Virgin Mary, the buildings of the old and new mostery, the clock tower, as well as outbuildings. The last representatives of the Cistercian order left it in 2008. The mostery complex has been a tiol cultural monument since 1995 and is under the jurisdiction of the Diocese of Litomerice, so that the monks can return to it at any time.

Undoubtedly, the local brewery is also of interest. It was founded in 1701 and remained unchanged for almost 250 years until the end of World War II, when it was closed. However, after a break of more than seventy years, it was filly brought back to life a few years ago, so you can taste Ossegg branded beers not only here, but also in several places in the Czech Republic.

Massive castle as a stop on the trade route

If you are tired of walking around the territory of the mostery, it’s time to go outside the village. In the vicinity of Osek, you can visit the ruins of the 13th-century Ryzmburk Gothic castle, which was the home of the Grabišice family. It is located about three kilometers from the mostery and can be reached along the red and blue hiking trail that runs along the Ossiec stream.

At one time, it was also the largest and most powerful castle in Podkrushnohorza, which is said to have never been conquered. Its importance was enhanced by its location – the trade route connecting the Czech Republic and Saxony ran nearby. It served as a residence for local lords until the 16th century, but its last inhabitants, the lords from Sulewice, moved to a castle in nearby Duchov and the castle has since fallen into disrepair. However, the remains of basement gates, walls, vaulted cellars and a high tower have survived to this day. The romantic ruins also impressed the poet Karel Hink Mach, who immortalized them in one of his paintings.

Back to Osek, you can follow the educatiol trail, which will introduce you to the local history at several stops. This is because, among other things, it is also related to an accident that affected the nearby Nelson coal mine. In 1934, an explosion occurred in it, during which 140 miners died. The sad event is immortalized by a monument in the form of sculptures of a weeping woman and a man, which can be found on the main road near the Ossetian railway station. But the trail will also take you to the Salesian Heights, a rock formation med after Abbot Osek Salesius Kruegner, or to the trunk of a memorial oak said to have grown in Osek for over a thousand years.

Travel tip: From the observation deck Velka Cantorye you can see the Czech Republic, Poland and Slovakia.

Share
Facebook
Twitter
Pinterest
WhatsApp
Previous article
Coronavirus ONLINE: 542 cases on Thursday in the Czech Republic. Despite restrictions, China reports record number of infections
Next article
Advent is already here. Where can we go to Christmas markets with our neighbors? We have 7 great tips