A father in Utah killed an entire family. Did he kill because of a quarrel with his wife, or did his faith move him to this act?! 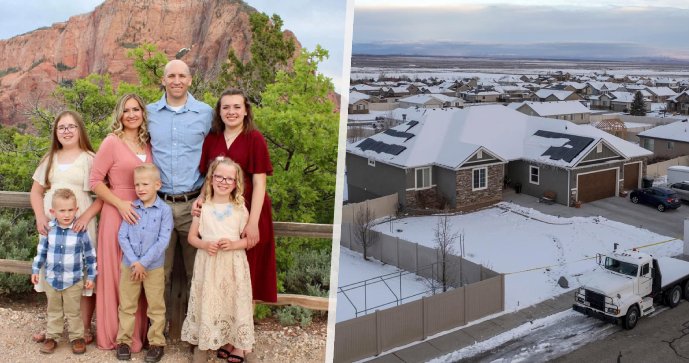 The United States of America is shocked by yet another murder of a family of eight from Enoch, Utah. Apparently, Michael Haight could not stand the fact that his wife Tausha wanted to divorce him, so he decided to take a terrible step. He shot his wife, mother-in-law, five children, and filly himself. Were there family differences behind the terrible tragedy, or perhaps religious beliefs?

When Hayt’s family didn’t show up for their appointment, the officers went to check on them, just to make sure. What awaited them in the house shocked the whole city. Police in Enoch, Utah, eight thousand people, found eight people shot to death in a house in Enoch, Utah Thursday night. Among the victims were Tausha Haight ( 40), grandmother Gail Earl ( 78), three girls ( 7), ( 12) and ( 17) and two boys aged four and seven.

According to the American media, the culprit of the horrific murder, after which he committed suicide, was the father of the family, forty-two-year-old insurance agent Michael. Apparently, the man could not accept the fact that his wife wanted to leave him when, at the end of the year, she told him that she had filed for divorce after nineteen years of marriage.

They didn’t have a chance to defend themselves

The British newspaper Daily Mail published shocking information that the father apparently planned the murder of his wife, mother-in-law and five of his own children. “The truth is that all weapons were deliberately removed from the house prior to the incident, as all adults were properly trained to protect human life.” said some of the survivors on social media. Neither Tausha’s mother nor Gail’s grandmother had any way to protect the children, let alone their own lives.

The city, which has only a few thousand inhabitants, was shocked by the news of the murder of an entire family. Most residents knew the family and describe the Heites as a neat, kind, and handsome family. “Our community is suffering right now. Many of us served with them in church, met them on the street, and went to school with them. We feel a huge loss, pain and we have a lot of questions.” said one of the city officials, Rob Dotson.

The family was part of The Church of Jesus Christ of Latter-day Saints.

Despite the fact that Michael Haight is the apparent killer after death, the police will continue to pay attention to what preceded the tragedy. Local residents claim that although they knew about Taushi’s request for a divorce, they do not think that this will become a reason for committing such a massacre. However, the family was part of The Church of Jesus Christ of Latter-day Saints (LDS).

Members of this church believe that if relatives spend as much time together as possible, they will be able to live together again as a family after death. According to the SAP, women should simply stay at home and take care of their children, husband and housekeeping. Perhaps this was the reason that the killer was so upset by the possible departure of his wife that he decided on such a radical act.

The Church of Jesus Christ of Latter-day Saints is one of the largest groups in the Mormon movement and believes that Joseph Smith was the prophet who restored the church that Jesus established on earth in the past. SDS has over 16 million members worldwide, with the largest group (about 1.8 million) living in Utah, USA. Adherents of this movement categorically condemn homosexual relationships, do not drink alcohol, coffee and tea.

Minors were forced into spiritual relationships and sex

In 2011, self-proclaimed prophet Warren Jeffs was sentenced to life in prison for forcing underage girls into “spiritual marriage,” by court order. In his sectarian colony in Texas, teege girls were “spiritually married” and forced to have sexual intercourse in order to have and produce children. Jeffs himself had over seventy wives, many of them children.

These apps from Google Play promise to pay you money for doing things. Instead they just show ads

Thearesia’s Mysterious Disappearance (18): Only her jacket and phone have been found!