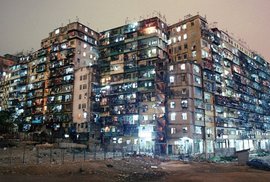 Initially, it was a place where, back in the 19th century, respected citizens of Paris gathered and discussed business issues during not-so-cheap massages, body wraps, and other procedures. Over a glass of Calvados in a tranquil setting guaranteed by the famous Guerbois family, renowned in Paris for their quality spa services. The environment of that time, which Marcel Proust also liked, could not be more at odds with the situation that arose a century later.

In 1978 the doors of Les Bains Douches opened again. But the interior has been changed to suit the needs of new visitors, who have turned the old resort into a nightclub known for loud music, drugs and promiscuous sex. Visitors included David Bowie, Andy Warhol, Jack Nicholson, Mick Jagger, Robert De Niro, Johnny Depp with Kate Moss, and Vanessa Paradisova, who was still a minor at the time.

Prostitution, drugs, gambling: the walled city of Kowloon did not follow any laws

Many of the spa’s origil features have been retained, so guests under the influence of various addictive substances enthusiastically threw themselves into the pools present and enjoyed the privacy afforded by the club’s elaborate interior. The author of the paintings that you can see in the gallery, Phok Kang also recalls the decadent atmosphere with nostalgia.

“It was the best period of my life. Around 1985 at the most. We didn’t know much about AIDS back then. Everyone slept with everyone. Anywhere, anytime, in any way. We were free,” he told sketch42.

Around 1990, the club began to decline. Whether it was the HIV epidemic or the development of society in Paris itself, there was simply no place for Les Bains Douches anymore. The building slowly fell into disrepair, and despite several attempts to restore it, the club never regained its former glory. Today, in its place is a hotel that has little in common with the origil resort.

Ziegfeld Girls: These sexy dancers are called the most beautiful girls of all time

Life under Ceausescu: Unique photos of Romania under a communist dictator

Share
Facebook
Twitter
Pinterest
WhatsApp
Previous article
Milan, from 2024, cars will drive around the city with a limit of 30 kilometers per hour.
Next article
There are 254 vacancies for medical specialists, mainly in general and family medicine.