Madness called “McDonald’s”: this is what the queue for the first Russian hamburger looked like, waiting for eight hours 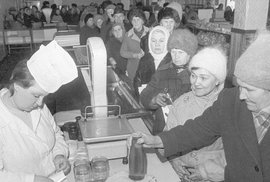 The largest McDold’s restaurant of its time was opened in Moscow on January 31, 1990. For the first hamburgers there were many hours of queues, although by the standards of that time they were insanely expensive. On the first day, 30,000 Muscovites passed through the doors of the 900-seat institution. Huge interest in the symbol of Western consumerism did not subside for several long months. People came from far and wide for their first hamburger.

The idea to open a McDold’s restaurant in Moscow was born during the 1976 Summer Olympics in Montreal. Its origins were the founder and director of the Cadian franchise George Cohon and the Soviet delegates. However, the plan was not implemented until shortly after the fall of communism.

The socialist phenomenon of the front: Everything was expected. For basic food and clothing

35,000 people applied for vacancies prior to opening. Selected 600 best. The magement was mainly guided by the desire to create as much contrast as possible with the past, when elderly women with a somewhat unfriendly appearance stood behind the counters of half-empty stores.

A Big Mac cost 3.75 rubles, and the average salary of a Muscovite in 1990 was about 150 rubles. People who have experienced the madness called McDold’s remember years later that they stood in line for eight hours.

Nobody objected. Because now everyone could be sure that at the end of martyrdom they would receive exactly the same product as the first in line. For many Russians, a McDold’s hamburger meant more than just an exotic dish from the forbidden West. They pinned their hopes on him for a better life.

You can see what the queue for the first Russian hamburger looked like in the photo gallery:

Want to see what the real Russia and Ukraine look like? Check out unique images

Share
Facebook
Twitter
Pinterest
WhatsApp
Previous article
Lawyer Kuchera: The Sparrow’s Nest case should be over by now. The trial was fair, guilt was not proven
Next article
Putting the classic Windows Start Menu in Windows 11? Can be done in just a few steps

These apps from Google Play promise to pay you money for doing things. Instead they just show ads