Pavel won the octagon on Prima. Message to Babish: This is not the Dragos family. 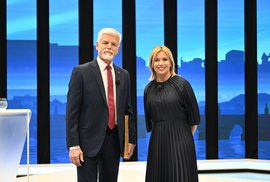 Petr Pavel and Danushe Nerudova exchanged gifts at the beginning of today’s super debate. Nothing could better emphasize the initial atmosphere of a friend of the president, which Prima, however, set against the backdrop of MMA. Pavel and Nerudova adapted over time and exchanged many blows, and although both seemed to be in shape, the general was more relaxed and confident. And the non-participation of Andrei Babish gave the ex-premier the best television.

Even though Andrej Babiš announced in advance that he would only come to the Thursday debate on Nova, advertisements for the “primary” super debate also advertised Babiš throughout the week. Prima, probably, did the best job with his dance around the debate – she lured the audience to Babish, and on the air it was not said at all that he had announced his non-participation in advance. To those who did not have an overview of the debate, it seemed that he had “knocked out” of the debate at the last moment. In a word, it became even more obvious that Babiš avoids confrontation. Not that it changed anything radically, but at least you could see who was who.

We voted for the presidential debate at Prima: Babiš was afraid to come again. Pavel…

Pavel and Nerudova, however, had enough for a duel, although they began the debate with a belated Christmas present. Pavel showed more origility and wit when he presented Nerud with a flannel shirt and put his favorite “trump cap” in Babish’s place, but instead of Babish “sorry yako” was written “general”. In return, Nerudova gave Pavel a box of chocolates, and it seemed that the super debate would really be a kind of non-conflict and friendly warm-up before the fight with Babish.

But the dramaturgy of the show was different, and at the very beginning, the presenters read out each other’s recent antics. First there was Pavlov’s quote that he, as president, would like to take Neruda’s accounting advice, which the former rector called a humiliation in a tweet on Monday.

Mr. Pavel will take me to the Castle as an accountant. Women in our country, unfortutely, are accustomed to such humiliation by men. So I think what the elections can bring 🧵

1️⃣ not have a former career communist, agent, intelligence agent or liar as president

2️⃣ not have an oligarch as president

Although it became clear from the reaction after Nerudova’s statement on Monday that this pre-election move failed, Nerudova continued to develop it today. Moderator Tomankova reminded her that she was still head of the Institute for Accounting and Taxation at Mendel University. Nerudova claimed that she publicly acts as an expert on taxes, and not on accounting. With her statement, she paradoxically belittled the field of accounting and the profession of an accountant, as if accountants were less valuable than the “taxpayers” to whom Nerudova so emphatically classifies herself.

In contrast, Nerudova was not behind the other attacks on Pavlov. When Tomankova asked her what she meant by the words about the agent and the spy, she answered evasively: “It was a general statement about the terms that are in the public domain.”

On the other hand, progress could be seen even with Neruda. In terms of speech, she was sometimes better than Pavel, spoke quickly and showed her deeper knowledge of economic topics. However, from the point of view of foreign policy, her words about Vaclav Havel seemed somewhat idealistic. More confident in this part was Pavel, who, on the contrary, spoke rather vaguely about taxes.

With balls and dentists on Babish

Nerudova needed to be taken care of, so she, for example, told her opponent that instead of the presidential standard, she prefers not to deal with the lack of dentists in the Moravian-Silesian Region or the price of eggs. Inflation and uffordable health care are fundamental issues that policymakers must address. At the same time, it is not clear what Nerudova really wants to do with this as the head of state. It will be interesting to see tomorrow’s clash with Andrey Babish in this thread, and maybe even the race with Andrey Babish.

He certainly followed the debate and must have seen two quite capable opponents before tomorrow. It is sometimes forgotten that five years ago President Zeman defended himself because his opponent Dragos was not very politically oriented and his election campaign was boring. The debates before the first round then resembled political science discussions, so Dragos was not prepared for the fight with the matador Zeman. Both Pavel and Nerudova are different opponents in this, they are better prepared and can put pressure on Babish in Nova. Today they played well against rivals.

5 questions to partners of candidates for the Castle. They described their vices and strengths

How Josef Stršedula failed the presidential super-debate, but did not understand his voters

Share
Facebook
Twitter
Pinterest
WhatsApp
Previous article
Biden found other secret documents: the president expressed surprise
Next article
Say “Hey Siri” and have your iPhone, iPad, and HomePod respond at the same time? You are not alone, but there is no solution from Apple yet