Collapse on Czech tracks: D1 and D10 closed due to accidents, D3 due to ice. A woman died in Mladoboleslavskaya 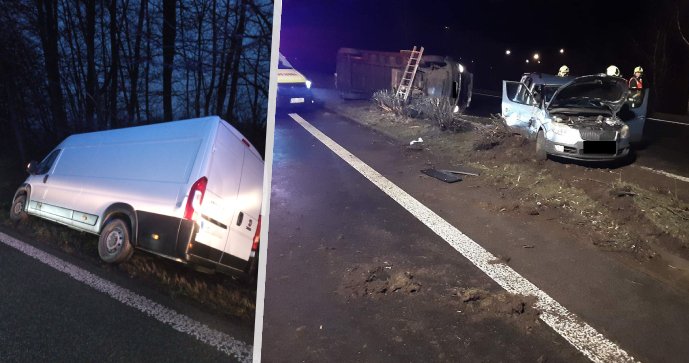 On Thursday morning traffic on Czech motorways was complicated by black ice and related accidents. The D10 highway was closed in both directions in a fatal accident, traffic on the D1 motorway near Brno in the direction of Vyškov was stopped by a car accident, and the D3 motorway in the direction of Tábor–Prague was closed by the police due to ice. The accidents caused a lot of injuries.

An accident involving several trucks closed the D1 highway in Brno in the direction of Vyškov shortly after 7:00 today. The accident happened between exits 194 and 196.which is the busiest part of the highway in the region, Pavel Švab, a South Moravian police spokesman, told CTK.

“The queue of standing cars is constantly growing, unfortutely, it is difficult to choose a detour for this section of the route”, Schwab said. The police have not yet specified the exact number of broken cars. Shortly after 9:30 a.m., the fire department tweeted that the highway was now open to one lane, and by 10 a.m., the highway was fully open.

The spokeswoman did not say exactly how many cars crashed on the D10. However, the highway was blocked in both directions. According to Sukhankova, traffic in Prague was partially restored by 8:30. In the opposite direction, it remains closed due to an investigation into a fatal crash. Columns formed on the highway, in which several bus routes were also stuck.

Five people were injured in a massive multi-vehicle crash on the D3 highway in Taborsk on Thursday morning. The doctors took everyone to the hospital. Zuza Faytlova, press secretary of the South Bohemian Rescue Service, announced this in her report.

The accident happened before 7:00. Three rescue teams and a helicopter arrived at the scene. “We brought two middle-aged men to České Budějovice with suspected mild to moderate injuries of the spine and chest. A man with a severe head injury was airlifted to the police department of the České Budějovice hospital. Faitlova said. The man and woman were then taken to the Tabor hospital with minor injuries.

Crashes also complicate traffic in places other than highways. First Class Road 13 near Cvikov in Českolipsk was completely closed for nearly two hours on Thursday morning due to a three-vehicle collision in which two people, the driver and the female driver, sustained moderate injuries. Until 9:30 reported the press secretary of the regiol police Ivan Balakova. The police are investigating the circumstances of the accident, according to the representative, it cannot be ruled out that it occurred on an icy road. Three more accidents occurred in the morning on the slippery road 9 between Česká Lipa and Novy Bor. In Jablonec d Nisou, a pedestrian was seriously injured in a collision with a bus.

“We put her on a ventilator. The ground team transported her to the trauma center of the hospital in Liberec. This was announced by the representative of the regiol emergency services Mikhail Georgiev. Around 6:00 a.m. on Rynovitska Street in Jablonec, a bus hit a woman.

According to Georgiev, two victims of the accident near Kunratich near Zvikov were also taken to the emergency room in Liberec. Until 6:45, three cars were shot there.

Share
Facebook
Twitter
Pinterest
WhatsApp
Previous article
Kevin Costner missed the Golden Globes: he had to take cover!
Next article
ONLINE: Ukrainians eliminated 100 occupiers in Soledar at once. And the Russians are running out of ammo