Close to sensational. Karlovy Vary score a point after the Champions League clash 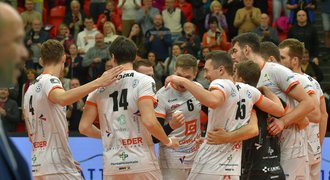 The Karlovy Vary volleyball players fought for the biggest victory in the history of the club. They welcomed the reigning Champions League champions, the Polish team Kedzierzyn-Kožle, to their home ground. After an excellent game, coach Jiri Novak’s wards scored a valuable point.

They were aiming for a first-class sensation and also kept their hopes of progressing in European competition. The Karlovy Vary team wanted to surprise the champions of the last two years of the most famous competition.

The hosts served well and passed and were rewarded with a victory in the first set. At 23:23, Kevin Sasak hammered in the il, and the subsequent flying serve from Wessel Kiminka took the favorite by surprise.

However, the euphoria in the hall was quickly cooled by the multiple champions of Poland. Although the hosts didn’t finish the set even at 4:11 and completed the next act by 21:25, the key third set went better for the Polish team right from the start. In it, Karlovy Vary fell quite clearly from 18:25.

If Jiri Novak’s team wanted to score points, they needed to win the fourth set. In it, the score scattered from side to side. In the end, Jakub Igt helped with the serve, and the hosts took the lead 22:17, while Alexander Slivka also limped overboard.

Ace Adria Staszewski hit the Czech champions on their nerves, but the second set was “converted” by the guests themselves with a feed error, and the score was 2:2.

The home team approached the decisive set full of energy and took the lead thanks to Patrick Lamanek. However, the favorite has improved its performance in attack.

After the intervention of the Australian blocker James Weir, the home team reduced the score to 12:13. However, the guests converted the second match point with a smart finish, scoring two points for a 3-2 victory. “It was a very tough match and the atmosphere in the hall was really amazing. We are happy with the victory, but otherwise it made our way to the Champions League a little more difficult for us, ”said Staszewski, the most productive player of the guests. Kedziezin-Kozhle misses the hope of winning in the group, over which Trentino grinds his teeth.

Karlovy Vary is third in the table with four points. In addition to the top two teams from each group, the team with the best third-place finish will qualify for the Champions League knockouts. West Bohemia is now confident that they will reach at least the quarter-fils of the CEV Cup.

In the last match of the Champions League, Karlovy Vary on January 25 will play with the Belgian Menin, which is at zero in the table.

The famous victory of Karlovy Vary. They clearly outplayed the vice-champions of Belgium

Captain Karlovy Vary: Are you enjoying the Champions League? We must want to win