Missing Nova and the Missing Hielscher, or the Second Debate B of Presidential Candidates 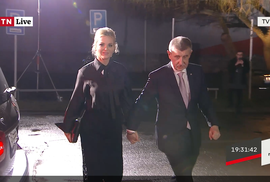 Probably, only political connoisseurs watched the starter for the “Second League” debate, which preceded today’s evening fil debate on Nova TV, in which Andrei Babish will appear for the first time. While the evening is expected to be the peak of the campaign before the first round, the debates of the weaker candidates were a display of boredom and gave the impression that they were a little pointless.

Setor Marek Hilscher understood this better than anyone. Apparently, he respected people who drew attention to themselves by running onto the field during a football game, believing they would be caught on camera. In his opening remarks, Hielscher criticized the “candidate apartheid” of the TV channels, which divides the candidates into two groups. He left his photograph on the pulpit and disappeared from the studio. Next time, he could just keep up with the times and use, like the recent French presidential candidate Mélenchon, for example, a hologram.

But Hielscher was actually right. The combition of the tactics of the TV channels and the decision of Andrei Babis to participate in only one debate led to a paradoxical situation, when most of the candidates never met the elected Babiš in the televised debates. Undoubtedly, this deprived some of them of a good opportunity to draw attention to themselves in a direct confrontation with the leader of the YES movement. It was Hielscher who was able to show his political ingenuity. Pavel Fischer, with his “calm force” style, was perhaps the only one who could derail Andrei Babis in the debate. And Yaroslav Bashta lost the opportunity in a direct confrontation with the ex-premier to show that he is the king of all opposition parties, who does not hesitate to threaten a de facto coup when he promises to dismiss the government in violation of the Constitution. .

We voted for the presidential debate on Nova: Andrej Babiš’s first confrontation. They got up…

At the beginning of the evening’s debate, most of the participants seemed to understand that these opportunities, as well as their chances in the elections, were futile. Not only the “winners” of the second league, Pavel Fisher and Yaroslav Bashta, lacked energy a little. The latter did not continue his speech at Serie B Prime, which caused a wave of his support, and only once in all 90 minutes threatened with his beloved Article 62 and the unconstitutiol resigtion of the government.

Caesar and the Setor’s Disciple

Tomasz Zima once again confirmed the squalor of “self-selection of candidates”, when presidential candidates are mainly those who have decided at home that they can be suitable presidents. Of all his invisible speech, he drew attention to himself, perhaps, only when, in his closing speech, he called on voters to support him with an unusual phrase: “Vote for me.” But it was more like not the fiery file of his entire presidential campaign, but the emperor from the movie “Asterix and the Olympic Games” and his self-satisfied statement: “Have me!”.

In addition to Hilscher, only a talented political apprentice and another product of “self-selection” Karel Divish, who plays not only on the image of an American setor, but also on sharp attacks and sarcastic attacks on opposition candidates, has lost a little weight. visible. Even from his speech today, one could tell a little tired…

In short, this argument was completely pointless.

An Absurd One-Act Play: The President’s Extras, or What B…

Everyone steals, only Andrey draws. As president, billioire entrepreneur Babiš would be in…