The business of the hockey goalkeeper Hasek collapsed: 50 million were stolen from him! 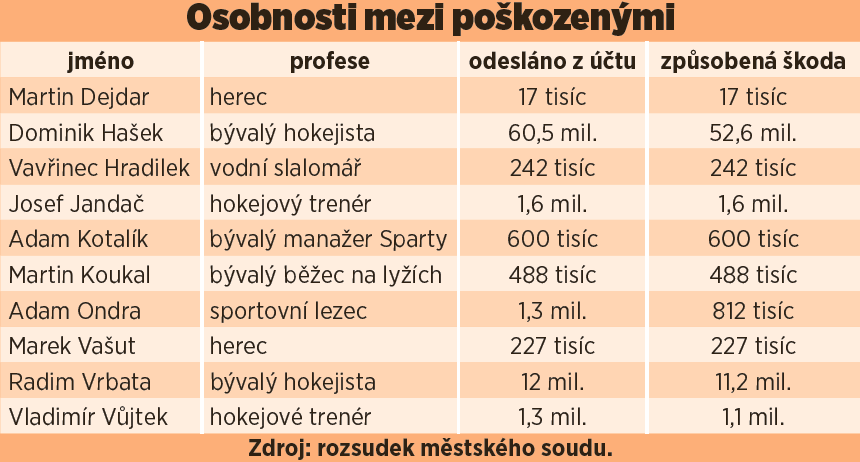 The goalkeeper was a genius, but as a businessman he is just a slap in the face! Hockey goalkeeper Dominik Hasek (57) lost more than 50 million crowns on another investment! Along with other celebrities, he most likely fell victim to fraud.

The goalkeeper was a genius, but as a businessman he is just a slap in the face! Hockey goalkeeper Dominik Hasek (57) lost more than 50 million crowns on another investment! Along with other celebrities, he most likely fell victim to fraud.

He left almost a hundred million in the Dominator clothing company, and the Smarty energy drink business also did not work out for him. And now it turned out that the hero of Nagant lost another 52.6 million crowns in the next hole! He invested in the trading system of the WSM company, which, according to the court, turned out to be a forex “airplane”.

“That was over five years ago. I got to him through people from the hockey environment, where it was discussed a lot at the time. Hasek said for Hospodářské noviny. Invested 60.5 million, received back about eight as payment. The rest is crap! “That’s not what makes me… How should I put it? I’m just not addicted to it.” the legendary Dominator, who earned CZK 1.3 billion gross in 16 seasons in the overseas NHL, told HN.

However, he is far from the only one whose memories of the WSM company awaken him from his sleep. According to Hospodářské noviny, there are 7,801 names among the affected investors, mostly doctors, lawyers, financial advisors and hockey players. Why those? WSM was a partner of the hockey association, a sponsor of clubs from Zlin and Pilsen, and the second largest domestic competition even bore his name.

Thus, among the victims of investments there are claims against the world champions Salfitsky, Vampola and Vlasak, the former head of the extraleague Rzeznick and the coaches of the national team Vuitek and Jandac. “I already mentally wrote off the money,” acknowledged Josef Jandach.

Other notables who have invested in WSM include actors Deidar and Vashut, world champion skier Koukal, mountaineer Ondra and kayaker Gradilek. According to the police, the total damage exceeded two billion crowns.

WSM is backed by businessman Jiří Kubitschek, who was sentenced to eight years in prison for fraud, a fine of nine million crowns and a ten-year ban from operating companies. By freezing his property, the police allegedly managed to repair about a third of the damage caused above. Kubitschek maintains that he is innocent and has filed an appeal against the final verdict.

Between 2012 and 2017, WSM offered licenses to Czech and Slovak applicants for an alleged invention, a robot that was supposed to assess business opportunities in the Forex market. However, the police did not find any software robots during the search, and the court stated that the entire system, which did not have any permission from the Czech National Bank, functioned as a so-called aircraft. The criminal case against Kubitschek was initiated by the Czech National Bank, which since 2014 has drawn attention to the suspicious activities of WSM. Three years later, Kubitschek was arrested by the police.

Share
Facebook
Twitter
Pinterest
WhatsApp
Previous article
Microsoft 365 office suite for individuals at the best price. The annual tariff will cost 699 kroons.
Next article
The new generation of OLED panels for smartphones from Samsung has a maximum brightness of up to 2000 nits.

Vlhova acted as a body without a soul in Spindle: a crisis in relations?

Win for the chest! Argentinian Fan Throws Out T-shirt: She Faces Jail!

Mbappe’s love secret: she was a guy!

Has Vrana already had problems in Washington? Cocaine Helper!