Fact checking. Do the ballots prove that the voters have already voted for the second round of elections in Brazil before October 30? 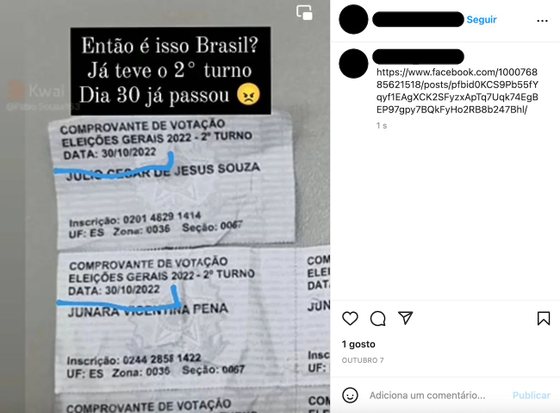 Images of purported evidence of a vote in the second round of the Brazilian elections are circulating on social media. Problem? The trip to the polls to choose Brazil’s next president took place on October 30, and the publication is dated October 7, three weeks before the election.

The image shows two evidence from the first round and three alleged from the second, but this is a mistake. The Regional Electoral Court of Espírito Santo assures that this is a test print that contained errors and that the printer wrongfully rejected it, eventually leading to social media proliferation and speculation of possible electoral fraud.

“The information that female voters from the 36th electoral zone, located in Pancas, voted in the 2nd round of the 2022 elections is false,” can be read on the website of the court, which specifies that “incorrect information began to circulate in social networks because of a photograph showing crumpled ballot papers with the number of the polling station, the polling station and the names of some voters.”

The court justifies what happened: “The printing house proposed by the Higher Electoral Court (TSE) for printing TRE-ES ballot papers, having discovered an error in the test print, did not dispose of the material properly, leaving a complete ballot paper.”

Justice claimed that the vouchers had been printed by mistake when the factory printed the ballots and that there was no suspicion of fraud. Those for the second round were to be made only before the second round of elections. However, it guarantees that the polling stations in the first round only received a “voting book for each round and that no voter voted for [a segunda ronda]”, which means that these ballots never reached the polling stations, because they were allegedly destroyed in advance.

On the other hand, the company justified the distribution of these ballots on social media because the paper was severely torn, explaining that the cuts are 4.5 centimeters by 4.5 centimeters, which could allow the ballot to be complete. “Now it is important to document that this is not some kind of falsification or fake. The inadequate fragmentation procedure was simply corrected,” explained Enrico Rimini, one of the company’s partners.

To the newspaper Estadão, one of the voters in question – given that the published images had names – explained that he had voted in the first round and that he “only received evidence” of this election. “This photo has already arrived in the city of Pancas, and many people ask about it, and in fact I don’t understand what happened,” Juranilton Pereira emphasized.

According to reports, the alleged evidence was found at a recycling station at a plant in Atibaia, more than 70 kilometers from Tamboré, Sao Paulo, where the printing company is located. The evidence in question relates to voters in the 36th constituency of Espírito Santo in the municipality of Pancas, where about 23,000 people vote.

The images in question do not prove that Brazilian voters voted in the second round or that electoral fraud took place. According to the District Electoral Court of Espírito Santo, there was in fact a mistake on the part of the printer who was supposed to destroy the papers, but they ended up in recycling bins at the factory, leading to several suggestions on social media. Known information, namely the statements of one of the voters in question, refute the allegations of fraud.