Fact checking. Does the Brazilian Constitution prohibit the president from speaking for three days after an election? 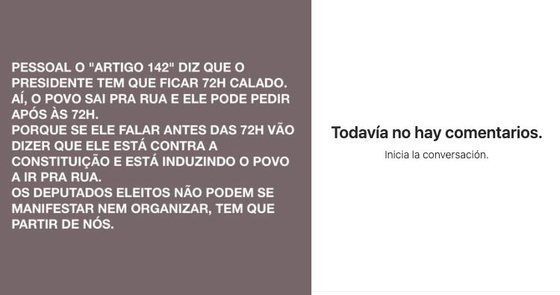 Lula da Silva was recently elected Brazil’s new president, but social media continues to dispute the results of the 2022 presidential election. The Instagram post even ensures that the Labor Party candidate had to “keep silent” for 72 hours, as the constitution dictates. “If he speaks before 72 p.m., they will say that he is against the Constitution and pushes people into the streets. Elected deputies cannot rally or organize demonstrations, it must come from us,” the author claims. However, this is a false post.

First of all, it should be noted that the publication in question does not publish any news that guarantees that “article 142 of the Constitution” requires the president-elect not to speak for the next 72 hours. With the above text, only the image is used, without any elements confirming what is being protected.

Let’s then look at the constitution, which dates back to 1988. Now the article mentioned in mail here in the analysis it is told about the Armed Forces. And it states the following: “They are permanent and regular national institutions, organized on the basis of hierarchy and discipline, under the supreme leadership of the President of the Republic, and are intended for the defense of the Fatherland, the provision of constitutional powers and, at the initiative of any of them, the rule of law.”

In the same article, in various paragraphs, rules are laid down that apply to all those who are part of the armed forces, such as the prohibition of “unionizing” and of participating in strikes, as well as the prohibition of “associating with political parties”. Thus, there is no reference to the obligation of the newly elected President of Brazil to remain silent for 72 hours after the election in which he was just elected.

On the other hand, Articles 76 and subsequent Articles of the Brazilian Constitution deal with, yes, these, issues inherent in the executive branch, which in the Brazilian case is under the authority of the President and Vice President. But even there, despite the description of the process leading to the election of the head of state of the country, there is no mention of the alleged ban on the public nomination of the elected candidate within three days after his election.

It is difficult – if not impossible – to understand how the author made the connection between the fact that Lula da Silva could not speak and the fact that this fact was inscribed in this (or any other) article of the Brazilian constitution. The argument has no support in the Constitution of the Federal Republic of the country.

Contrary to what the author of the original post claims, the Brazilian Constitution does not say that the President-elect of Brazil must remain silent for 72 hours after an election. The aforementioned article, number 142, deals with the armed forces and their role in Brazilian civil society. And the articles which refer to the rules laid down for the exercise of presidential powers also do not impose the prohibition referred to in mail🇧🇷

Share
Facebook
Twitter
Pinterest
WhatsApp
Previous article
Spasio, Italian delegation in Paris at the ESA ministerial meeting: along with Urso (who does not speak English) also adviser to Giorgetti.
Next article
Ukrainians make portable boilers to fight the harsh winter