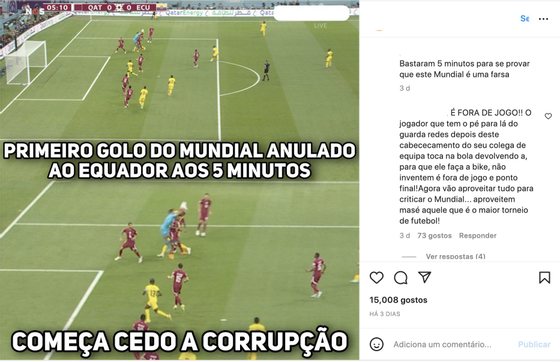 The offside law is one of the most controversial and complex laws in football. Even though it is a fundamental principle of football, it is often responsible for the annulment of goal attempts − something that naturally leaves referee teams under fire after a tough decision.

In Qatar, where there is a new semi-automatic offside technology in which the ball has sensors and sends information directly to the VAR, The World Cup immediately began with one of these controversial moves. In the fifth minute of the first match between hosts Qatar and Ecuador, the refereeing team – apparently on the advice of VAR – decided not to count Valencia’s Felix Torres’ offside goal earlier in the game.

Despite the decision and victory of Ecuador, as well as additional difficulties with the interpretation of the application, doubts remained: Why is Felix Torres offside? A doubt that, in the hours and days that followed, gave rise to several considerations and posts on social media that questioned the suitability of the arbitration team and the veracity of the stated wrong position. One of them came from an Instagram post claiming that “corruption started early.” “Five minutes was enough to prove that this World Cup is a farce,” adds the author of the article. mail🇧🇷

On this particular shot, when a free kick was taken into the box, Félix Torres shared the game with goalkeeper Saad Al Sheeb. The ball fell on Michael Estrada, who returned it to Torres to help him score the goal that Valencia should have scored. However, when Torres touches the ball for the first time, Estrada was ahead of the penultimate player of the opponent, who was Abdelkarim Hassan.

The confusion arose due to the fact that in the vast majority of cases, the goalkeeper and another specific element were the last and penultimate players of the opponent. However, in this application the goalkeeper was even the penultimate element of Qatar, Michael Estrada is flagged for offside due to his foot being ahead of Hassan.

Michael Estrada was even on the sidelines when Valencia scored as he was ahead of the penultimate Qatari player at Torres’ pass. The goal was soon well annulled by the referee team.