Fact checking. Fans of the Vasco da Gama club greeted Lulu with cries of “your place in prison”? 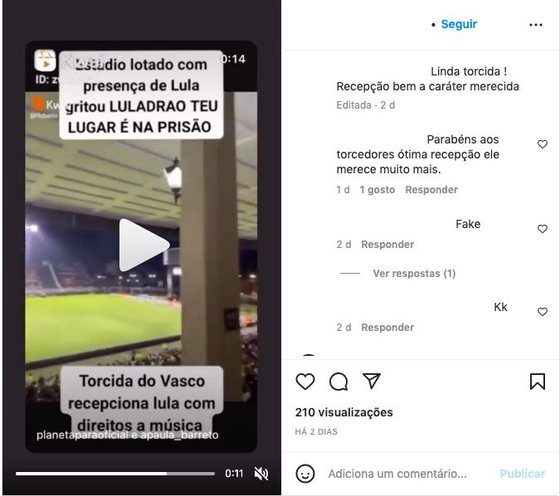 At the end of October, videos of chants performed at a stadium in Brazil, where President-elect Lula da Silva was supposed to be present, began to circulate on social networks. Chants insulting Lulu classified him as a “thief” and, judging by the subtitles added to the video, were supposed to have been sung on the arrival of the president-elect a few weeks ago by supporters of the Vasco da Gama club. . Even though the images were real and the chants were sung, Lula da Silva was not present at the stadium, contrary to the claims of various publications.

Judging by the signatures to the publications, Lula da Silva was supposed to go to the stadium in the company of the mayor of Rio de Janeiro, Eduardo Paes, but on that day (October 28) neither one nor the other was at the stadium. According to news reports in local newspapers, video footage was recorded of Vasco da Gama and Sampaio Correa’s team keeping Vasco from returning to Serie A of the Brazilian Championship.

Due to the unfavorable result for the hosts, the climate among the fans escalated, conflicts broke out in the stands between the supporters of Jair Bolsonaro and Lula da Silva. This was reported shortly after the game by the Metropoles newspaper, reporting “clashes between supporters and opponents of President Jair Bolsonaro”.

In the videos, where you can even see how fans of one team attack each other, Flavio Bolsonaro is reported to be present at the stadium, who is held responsible for starting conflicts between fans. And, according to reports in local newspapers, it is in this exchange of arguments between supporters and opponents of Bolsonaro that the insults against Lula da Silva are also shown, recorded on video that is being circulated on social networks, as if it were an attack on Lula. and their presence in the stadium.

In addition to the anti-Lula da Silva chant, there were also supporters chanting in support of the president-elect, according to Brazilian media reports, another show of supporter strength in the presence of – right – Flavio Bolsonaro (Vasco da Gama supporter) on the presidential bench of the stadium that night .

The game took place about a week before the second round of the presidential elections in Brazil and coincided with the passage of Jair Bolsonaro’s pre-election caravan through the western zone of Rio de Janeiro, which was taken advantage of by Flavio Bolsonaro, the son of President Bolsonaro. the opportunity to go to the stadium to watch the game, which will ultimately dictate the team’s succession to the Serie B championship.

It is not true that insulting chants against Lula da Silva were sung in the presence of Brazil’s president-elect, as social media posts claim. The images were recorded even before they went to the polls in the second round of elections, and only Jair Bolsonaro’s son, Flavio Bolsonaro, was in the stadium. As supporters clashed to support the opposing candidates for the presidency of Brazil, chants were sung in support and criticism of both sides, contrary to what the images show. Lula da Silva was offended, but he was also defended by other supporters, and the same thing happened to Jair Bolsonaro.

PARTLY FALSE: Content claims are a mixture of accurate and inaccurate facts, or the underlying statement is misleading or incomplete.