Morning check: The number of covid cases in China is on the rise. Russia may use chemical weapons, US says 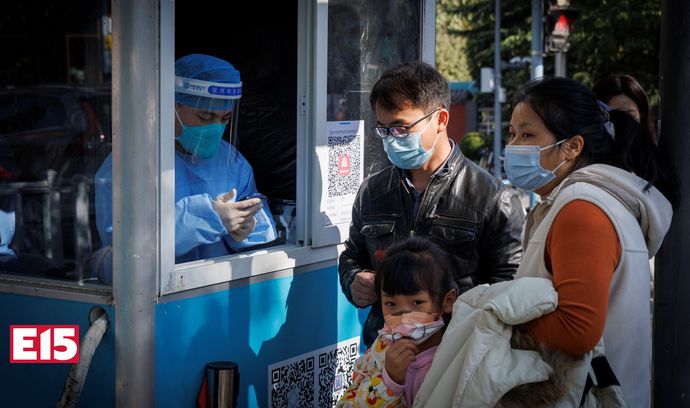 Good morning! Today is the 328th day of the year, the holiday of Emilia, and on this day in 1966, an Il-18 crashed near Bratislava on the way from Sofia to Prague. All 82 people on board were killed. This is the worst plane crash in Czechoslovakia.

North Korea condemned Seoul’s attempts to impose additional sanctions on Pyongyang in retaliation for its repeated missile tests, saying such measures would only increase North Korea’s “hostility and anger”. Kim Yo-jong, the powerful sister of North Korean leader Kim Jong-un, also called South Korean President Jung Suk-yol “and other idiots” the “loyal dogs” of the United States in a statement, state news agency KCNA reported. The South Korean Foreign Ministry announced on Tuesday that it is considering imposing additional sanctions against Pyongyang. For example, he considers sanctions against cyberspace.

✅ Daily additions of covid-19 in China are growing

Over the past 24 hours, China has seen its highest daily increase in COVID-19 cases since the pandemic began nearly three years ago. Excluding imported cases, 31,444 new cases of coronavirus infection increased on Wednesday, of which 3,927 were symptomatic and 25,517 were asymptomatic. On April 13, the number of new cases surpassed the previous record of 29,317. One infected person has died. China has reported 5,232 coronavirus deaths since the start of the pandemic.

The administration of US President Joe Biden believes that Russia may use chemical weapons in Ukraine before engaging in a possible nuclear confrontation with NATO. This could happen if Moscow buys into further setbacks on the battlefield, Politico writes, citing anonymous sources. According to six well-informed sources, including Pentagon officials, the United States has no indication yet that such an attack in Ukraine is imminent. Many US Defense Department officials believe that the intensity of hostilities will decrease during the winter months and that neither side will be able to return significant territory.

More information about events in Ukraine can be found here >>>

✅ Republican Senator Murkowska won the election to the Senate in Alaska.

Brazil’s Supreme Electoral Court President Alexandre de Moraes on Wednesday dismissed a complaint by President Jair Bolsonaro’s party about alleged irregularities in the second round of presidential elections. In it, he lost to Luis Inacio Lula da Silva. De Moraes, who is also a Supreme Court judge, also fined Bolsonaro’s coalition parties 22.9 million reais (more than 100 million crowns) for what the court called “bad faith inciting a dispute.” This week, Bolsonaro filed an appeal with the electoral court. on Tuesday. According to his right-wing coalition, during the election, some electronic voting machines failed.

Share
Facebook
Twitter
Pinterest
WhatsApp
Previous article
Quick Challenge: Find all 8 hidden objects in less than 20 seconds and show your Hawkeye
Next article
Actress Christina Applegate is battling multiple sclerosis. What touching confession did she send to her daughter?