Fact checking. Australia banning people under 30 from getting 4th dose of Covid vaccine due to ‘high’ risk of death? 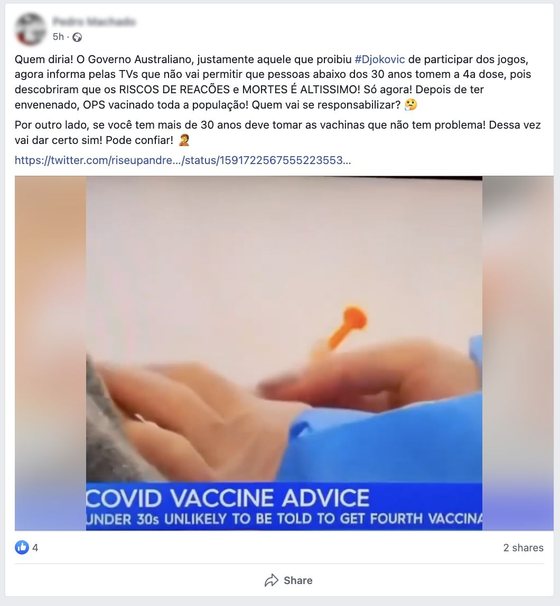 A Facebook post said that in Australia, the fourth dose of the Covid-19 vaccine was banned for children under 30 after authorities found a high risk of death associated with taking the vaccine. Publications with the same statements were made in twitter🇧🇷 The content is misleading.

To date, about 88.25% of the population in Australia has been vaccinated with at least one dose. But in recent weeks, the number of people infected with the novel coronavirus has been on the rise. This has led to the Australian Department of Health leaving new recommendations for the public.

Health Minister Mark Butler unveiled the measures proposed by ATAGI, the technical group that advises the Australian government on immunization issues, on November 15 (the day before the publication, which the Observer is checking). The new dose of the vaccine was recommended for the elderly and at-risk groups, but not for the entire population.

In Australia, anyone over the age of five can be vaccinated, but the number of doses administered depends on the age group, similar to how it is done in Portugal. The latest peak in the incidence of Covid-19 was recorded in Australia. in July of this year, the government no longer encouraged young people under 30. And, with the ensuing increase in cases, the solution remains.

O The Australian government did not mention that the decision was made due to the risk of myocarditis or the risk of death., contrary to what the publication writes. But one ATAGI member said it was unlikely that people under 30 (without comorbidities) would be vaccinated. According to the Sydney Morning Herald, Allen Cheng said the decision was due to an “increased risk of myocarditis and no discernible benefit” with a booster dose in this age group. “Vaccination is beneficial and protects young people, but the more doses are given, the less benefit we get from them,” explains the scientist. “Someone in their 30s who is infected with Covid-19 is not likely to develop complications, unlike someone in their 60s or 70s,” he adds, saying that a young person with three doses of the vaccine is still “optimally protected.”

According to the World Health Organization (WHO), cases of myocarditis caused by vaccination against Covid-19 are rare. The institution also says the risk of infection is higher than with vaccination.

The post, which appeared on several social networks, claims that the Australian government has decided to ban the third dose of the Covid-19 vaccine to people under 30 years of age. According to the exchange, the decision is based on finding “very high” risks of reactions and death. But not all of this is true.

Australian health authorities have for some time stopped recommending boosters for people under 30, but there have been no reports of death risks for this age group. One member of the ATAGI (Australian Council on Immunization) said the decision is because citizens are at risk of side effects such as myocarditis for a benefit that may not be noticeable. “Vaccinations are good and protect young people, but the more doses given, the less benefit we get from them,” he explains. WHO already recognizes the risk of myocarditis in this age group, but reports that there are more cases where this occurs due to infection than due to vaccination.

PARTIALLY FALSE: content statements are a mixture of accurate and inaccurate facts, or the underlying statement is misleading or incomplete.

Share
Facebook
Twitter
Pinterest
WhatsApp
Previous article
Gilbert, the robotic fish that filters microplastics out of the water with its gills (video)
Next article
After 40 years, the Czech Republic has a cosmonaut! Pilot Alesh Svoboda in the ESA reserve team.