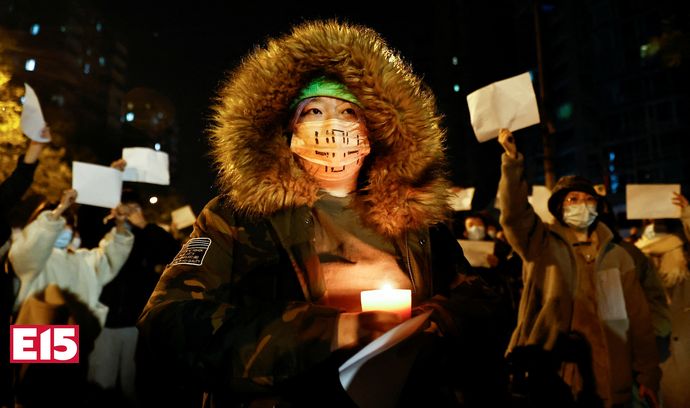 Good morning! Today is the 332nd day of the year, René’s Day, and 28 years ago Norway refused to join the European Union in a referendum.

✅ Chinese protested over the weekend, the number of cases of covid is growing

Over the past day, the largest number of new cases of coronavirus infection has increased in China, according to Reuters. This comes after a weekend marked by unprecedented protests in various parts of the country due to anti-epidemic measures. In many cities, demonstrations continued until Monday morning.

Beijing police cracked down on hundreds of people protesting near the diplomatic quarter. It was the first major demonstration in the capital since President Xi Jinping came to power in 2012. The police dispersed the action under the pretext that its participants blocked traffic. Further clashes took place in Shanghai. Blank white sheets of paper have become a symbol of the current wave of protests, through which people express their opposition to censorship. In various places, they called on the authorities to lift restrictions due to the coronavirus.

✅ Oil prices are the lowest since December

WTI oil fell to its lowest level since December, and Brent oil since the beginning of the year. The turmoil in China undermined investors’ risk appetite and added to pessimism about the demand outlook for commodities, heightening tensions in an already fragile global oil market. West Texas Intermediate oil has fallen below $74 a barrel, while Brent oil is hovering around $84.

“Mood in the oil market remains negative and developments in China over the weekend are definitely not helping,” said Warren Patterson, head of commodity strategy at ING in Singapore, according to Bloomberg. Oil demand in China could average 15.11 million barrels a day this quarter, up from 15.82 million barrels a year ago, analyst firm Kpler said, according to the agency.

According to Ukrainian President Volodymyr Zelensky, Russia is planning new missile strikes this week that will damage Ukraine’s energy infrastructure. He noted that the next few days will be as difficult as the previous ones. “We understand that the terrorists are preparing new attacks, we know this for sure. And as long as they have missiles, they will not rest,” President Zelensky said in his regular Sunday evening speech.

In Kyiv, snow, sub-zero temperatures, fog is expected tonight. The city authorities said they had almost restored the supply of electricity, water and heat, but due to high consumption they had to carry out planned shutdowns. Ukraine’s energy infrastructure suffered the worst damage in nine months of Wednesday’s Russian invasion in a series of Russian missile strikes. Kyiv claims that its targeted damage is an attempt at genocide.

✅ British chemist in talks with Rolls-Royce to use nuclear technology

Ineos, a chemical company owned by billionaire Jim Ratcliffe, is in talks with Rolls-Royce about nuclear technology. It could be used as a zero-carbon energy source for the Grangemouth refinery in Scotland. The chemist plans to use hydrogen at the plant, which employs 2,000 people, according to The Guardian. However, this requires a large amount of electricity, and the company is considering ways to generate this energy.

A deal with Rolls-Royce could help it tackle the daunting task of decarbonizing a giant oil refinery and also give Rolls-Royce its first customer for the new technology. This is one of the few companies in the world that hopes to use the experience gained in the construction of nuclear reactors for the submarine fleet, and on land.

Share
Facebook
Twitter
Pinterest
WhatsApp
Previous article
M5S, Pd and even Calenda: everyone agrees “yes” to the minimum wage. But everyone has a different recipe to get there (and claims its own law)
Next article
We are smaller and poorer. Does Portugal have a future? Call 910024185 and start live streaming on Contra-Current