The Czech Republic has a chance to show that it takes the fight against corruption seriously, according to a German critic of Babiš and Orban. 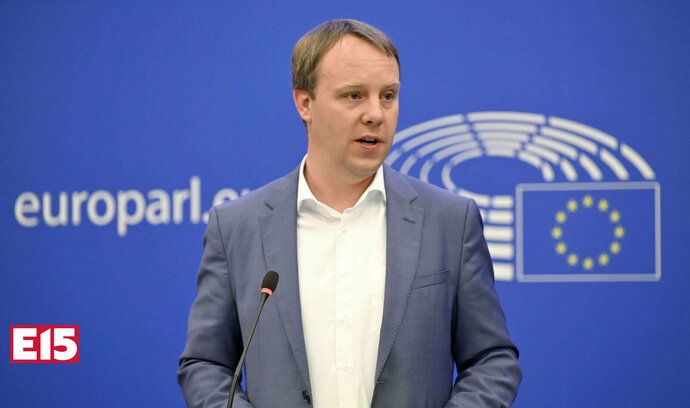 Today, the European Commission, in all likelihood, will recommend to the EU countries to block Hungary 7.5 billion euros, about 183 billion kroons from EU funds. According to Daniel Freund, a German MEP for the Green Party and a prominent critic of the Orbán regime, the upcoming vote is an opportunity for the Czech Republic as well. “Your government can show how serious it is about fighting corruption and whether it can take this promise to the European level,” Freund says in an interview with E15 daily.

How do you feel about the news that the European Commission is likely to recommend to the EU states to block the transfer of part of the money from EU funds to Hungary due to the lack of reforms in the field of the rule of law?

This is the turning point of the whole process. We have fought for years to freeze Hungary’s European funds in the European Parliament for several reasons. On the one hand, because of the huge violation of the rule of law, and also because this money often ends up in the pockets of Viktor Orban, his family and friends. The European Commission has already responded to pressure from MEPs, now it is the turn of member governments to approve the blocking of funds in December. In any case, Hungary received a clear signal from the European Union that our patience has run out and the autocrats will not see any money from us.

Do you expect Member States to follow the Commission’s recommendations?

It’s hard to predict, but I hope so. Orban is understandably trying to prevent this in every possible way. For example, he blocked the entry of Sweden and Finland into NATO. He also vetoed the introduction of a global minimum tax for large corporations or financial assistance to Ukraine. I believe that European governments will not allow themselves to be blackmailed or deceived by the statement that Hungary is really implementing some kind of reforms. We must stand together not only for upholding democratic values, but at the same time protecting the money of European taxpayers, because at the moment we are really throwing their billions of euros into a corruption hole.

Does the EU have a plan in case Budapest continues to block key decisions?

If Hungary does not stop vetoing aid to Ukraine and the minimum tax, it could immediately lose another five billion euros earmarked for economic recovery after the coronavirus pandemic. There is no question of freezing here, this money would be irretrievably lost for the Hungarians. I don’t expect Orbán to afford to retain such a costly veto. There is also the possibility of activating Article 7. If all the other states of the European Union agree, Hungary could be deprived of the right to vote.

How do you feel about the proposal of German Chancellor Olaf Scholz to change the voting system and decide important issues with the consent of a simple majority of states, and not every member?

The introduction of a vote requiring the unanimous consent of all members is one of the biggest mistakes the European Union has ever made. Just look at it from Vladimir Putin’s point of view. In fact, we could not even offer him an easier way to completely paralyze the European community. At the moment, it is enough for Putin to threaten one person or bribe him with cheap gas, and through him he will block the entire European Union. This is completely unacceptable in time of war and threatens collective security. After all, it is also undemocratic for a single government of a small member state to advocate a solution that 90 percent of the population of the Union wants. We should at least start discussing the possibility of lifting the veto, especially in matters related to our common security, sanctions, and also the tax system. By simple majority decisions, we could work faster and better.

Hungary is not the only EU country that is having difficulty upholding democratic values. Do you think the state of the rule of law has improved, for example, in Poland?

Poland still has many shortcomings in this area, and because of them, it cannot yet receive all the funds from the European treasury to which it is entitled. It is also necessary to make it clear to the Polish government that we will not tolerate restrictions on an independent judiciary or media in Europe. On the other hand, it should be noted that Poland helps Ukraine more than all participating countries. He received the largest number of war refugees and provided Kyiv with the greatest military support. Therefore, at present it is not in such political isolation as Hungary.

What would you say if the next president of the Czech Republic was Andrej Babis, who is considered a political ally of Orban?

As you probably know, I am not a fan of Mr. Babiš and have often criticized him in the past. The European Commission investigated him for conflicts of interest and repeated fraud with European funds. I think he got more money from the European Union than any other European. Of course, it depends on the citizens of the Czech Republic which candidate they choose, but I certainly worry about every other populist leader in the European Union. That’s why it’s so important to freeze Hungary’s funds in the EU. This applies not only to Hungary. We must make it clear that failure to respect democratic principles is unacceptable everywhere.

How would you rate the Czech Presidency of the Council of the European Union? Was he successful?

I will tell you this only after the voting on Hungary is over. If I’m not mistaken, your current government won the election claiming to fight corruption and conflicts of interest. Now he can show whether this promise applies only to the territory of the Czech Republic, or whether he can transfer it to the European level as well.

European Commission Vice President Frans Timmermans announced the week before last at the UN climate summit in Egypt that the European Union intends to tighten its climate targets. Is now the right time to do so, given the current energy crisis?

If we had invested more in renewable energy in the past, we would not have had to deal with some of the current gas shortages or high fossil fuel prices at all. When it comes to long-term goals, the markets speak clearly. Renewable sources are the cheapest form of energy and much more reliable than gas imported from Russia and other totalitarian regimes. If Europe is to survive in the global economy ten to fifteen years from now, we need to really accelerate investment in clean energy.

But aren’t the Europeans being hypocritical when they claim to be leaders in carbon neutrality while at the same time buying LNG contracts from developing countries?

Unfortunately, we cannot achieve carbon neutrality overnight and we need to keep working during this transition period. In short, it requires compromises. Even the German minister from the Green Party (Robert Habeck – note ed.) was due to travel to Qatar this year to negotiate LNG import contracts.

One such compromise is that Germany will end up keeping its last three nuclear power plants in operation, which were supposed to be closed this year?

We greens would prefer not to take this step. Nuclear power plants will operate all this winter, but it is important that they are closed immediately after it. Nuclear energy is not among the energy sources of the future. It’s too expensive, dangerous and unreliable, just look at France, which is now struggling with electricity shortages due to technical problems with nuclear reactors. Nuclear output is essential, we need to invest in cheaper sources such as wind, sun and water.

Do you see it as a problem if some countries use nuclear energy instead of gas as a transitional source to achieve carbon neutrality?

It does not matter if the states temporarily keep the existing power plants that are stable and safe. However, no country should build new reactors. After all, many Eastern European countries also imported nuclear fuel from Russia, and as we see from the supply of oil and gas, Russia is not a reliable partner.

Share
Facebook
Twitter
Pinterest
WhatsApp
Previous article
Action hero Gakpo. Will he replace Ronaldo at United? Let’s see what happens, he said.
Next article
Money ceiling, question-answer Sallusti-Travalho on La7. “The increase favors the healthy part of the country.” “No healthy person walks around with a pack of 10,000 euros”