Ukraine can get Leopard 2 and Challenger 2 tanks. European hawks put pressure on Berlin 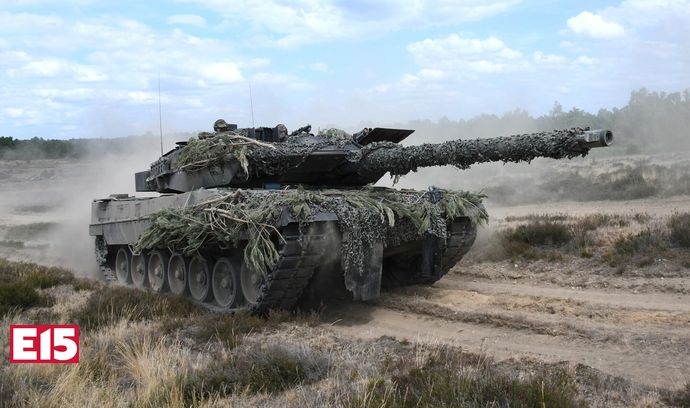 Although last week Germany promised to supply Ukraine with Marder infantry fighting vehicles, European partners are putting pressure on it to provide it with Leopard 2 tanks. Poland, Finland, and France are taking the initiative in this regard. Some countries believe that the best way to convince Berlin is by their own example, and are trying to form a coalition of Leopard donors. Meanwhile, the UK is considering helping the country under attack in the form of a Challenger 2 tank.

At the beginning of the year, Ukraine received a promise of additional weapons that could help push Russian troops out of its territory. After a telephone conversation between Chancellor Olaf Scholz and US President Joe Biden, Germany announced that it would supply forty Marders, as well as a Patriot air defense system. “We are far from tired of helping Ukraine,” said Niels Schmid, representative of the SPD parliamentary faction for foreign policy. At the same time, Bradley promised to send fifty infantry fighting vehicles to Washington and AMX-10 RC armored vehicles to France.

Experts suggest that while the latest weapon announcements are valuable, they are not enough. According to them, Western assistance usually responds to requests arising from the situation on the battlefield with a delay. “The good news is that the menu is getting more and more sophisticated. But because of the slow pace, the war is dragging on longer than necessary and desirable, former US Ambassador to Ukraine John Herbst told the Atlantic Council think tank.

What the Ukrainians really want at the moment are modern Western tanks that give them an advantage over Soviet and post-Soviet weapons. Valery Zaluzhny, Chief of the Ukrainian General Staff, recently called on the West to provide the country with 600 to 700 infantry fighting vehicles and 300 tanks. Kyiv is especially interested in the Leopard 2 from Krauss-Maffei Wegmann, which is not only available in the German army, but also used by other European countries.

Only two thousand of these machines are now in service in thirteen states. However, Berlin must allow their possible re-export. He is still resisting such a step, fearing an alleged escalation of the conflict. Scholz’s critics argue that this fear has no rational basis. And commentators point out that the Marders’ promise already points to a change in German approach.

Currently, Poland is talking about creating a group of countries that could provide some of their “Leopards” and put pressure on Germany to allow them to be deployed in Ukraine. “We are calling on other countries to form a broad coalition to move more modern tanks, such as the Leopard tanks, to Ukraine,” Deputy Foreign Minister Pavel Yablonsky said on Polish public radio.

There are mixed signals from Germany

It can be Finland, Denmark, Greece and Spain. Calls have already been made in Finland to “free the Leopards, which are Russia’s nightmare, from European warehouses.” And the Politico website wrote that Paris is also pushing for close cooperation with Berlin as the 60th anniversary of the Élysée Treaty between Germany and France approaches. French President Emmanuel Macron reportedly wanted to break the taboo by announcing the delivery of the AMX-10 RC to Ukraine, as these vehicles are sometimes referred to as “light tanks”.

At the same time, there are mixed signals coming out of Germany and it is not clear at this point if it will falter for the foreseeable future. “At this time, the federal government has no intention of supplying Ukraine with Leopard 2 main battle tanks,” government spokesman Steffen Hebestrait said this week. “Of course, this cannot be ruled out,” Economy Minister Robert Habek said on the air of the ARD TV channel.

Britain may be the first to break the taboo on tanks

In the meantime, information appeared in the media that London is considering the possibility of providing Kyiv with Challenger 2 tanks, but a final decision has not yet been made. “It can inspire others as well,” an unnamed Ukrainian official was quoted as saying by Sky News. According to a TV source, Ukraine could get a dozen British tanks from the army. He also pointed out that in itself this would not cause a breakthrough, but in this way London could be the first in Western Europe to break through the tank barrier.

“Strategically, this sends a very strong signal to Putin that all options are at play. Challenger 2 and Leopard 2 are modern tanks. They are much better protected, more reliable, faster,” British Colonel Hamish de Bretton Gordon told Sky News, counting the possible benefits for Ukraine.

Kyiv is also eyeing American M1 Abrams tanks, but Biden has so far refused to send them. However, there are opinions that even Washington can change its mind. Moreover, the Bradley vehicles are designed to work together on the battlefield with these tanks. “This is another step on the part of the administration to provide what it has not wanted to do in the past. So this perhaps signals a recognition that the Russians really cannot escalate the situation every time we supply Ukraine with more powerful weapons, ”commented Washington’s decision to send BVP to Politico, retired American General Ben Hodges.

Share
Facebook
Twitter
Pinterest
WhatsApp
Previous article
A bright green comet flies past Earth. It was only recently discovered
Next article
A fake ChatGPT app is very popular on the App Store: it’s asking $7.99 a week but it’s fake