Bolsonaro shared a video stating that Lula was not elected by the people. The post was deleted two hours later.

Jair Bolsanaro shared and deleted the same video that had only been online for two hours. The events take place one day after the former President of Brazil was discharged from the hospital after being hospitalized due to an intestinal obstruction.

In the content that appears after the invasion of the Congress, the Planalto Palace and the Supreme Court by thousands of Bolsonaro demonstrators who challenged the results of the presidential elections that brought victory to Lula da Silva in October. — the former president shared a video who attacked the Brazilian electoral system and where it was said that the current head of the Brazilian state was not elected by the peopleexplain G1, the Globo network website and the Folha de São Paulo newspaper. 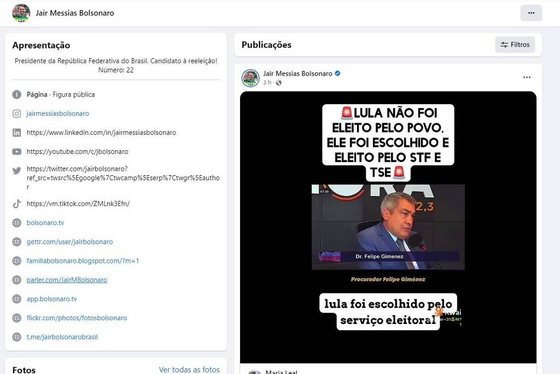 “Lula was not elected by the people. He was selected and elected by the STF [Supremo Tribunal Federal] and TSE [Tribunal Superior Eleitoral]”, can be read in the image of the post released by Folha de São Paulo and in several Twitter posts. In a video posted to Facebook, Felipe Jiménez, whom G1 identifies as the state attorney for Mato Grosso do Sul, criticized the security of electronic voting machines.

According to G1, the prosecutor also said Brazilian citizens have no “power” in the vote count process. The video was shared by the former president, who reposted the supporter’s content.

Bolsonaro just deleted the post below, saying that Lula’s election was illegitimate. Sounds like cowardice—and it is—but the damage has already been done. The message to the horde following him has been relayed. As long as he remains unpunished, this nightmare will never end. And that’s exactly what he wants. pic.twitter.com/NGBKUHkk4y

Jair Bolsonaro left the Advent Health Celebration Hospital in Florida on Tuesday, January 10, against the advice of a doctor. The specialists accompanying him advised him to stay in the hospital for another three or four days, given that he was still unable to eat.

Bolsonaro has already left a hospital in Florida against medical advice.

The former Brazilian president suffered from an intestinal obstruction that may have been the result of a stab wound he received in 2018 during the election campaign that brought him victory. He has since had to be hospitalized twice more for the same reason.